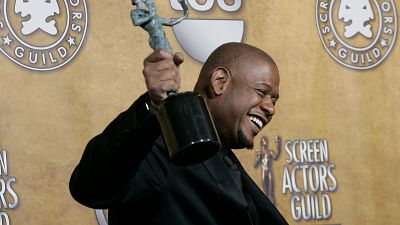 Forest Whitaker holds the award for outstanding performance by a male actor in a leading role for his work in "The Last King of Scotland".   -   Copyright  Reed Saxon/AP
By Jonny Walfisz  •  Updated: 18/05/2022

US actor Forest Whitaker has received an honorary Palme D’Or at this year’s Cannes Film Festival, saying he is "touched" that his work has been acknowledged.

It won’t be the first big acting award for Whitaker who has won an Oscar, BAFTA, Golden Globe and who also took home Best Actor at Cannes in 1988.

Ever since Whitaker first graced our screens in 1982 in a supporting role for “Fast Times at Ridgemont High”, the actor has delivered some fierce performances in unforgettable films.

Here are five of his greatest efforts, in our humble opinion (and in no particular order).

Just six years after graduating from the University of Southern California with a BFA in acting, Whitaker was cast as the lead role in Clint Eastwood's biopic on saxophonist Charlie "Bird" Parker.

The film follows the phenomenal jazz musician from his childhood through to his premature death aged just 34. It was the perfect role to cement Whitaker as a serious actor, giving him emotional work to play with, as well as the challenge of learning to play the saxophone.

Whitaker won Best Actor at Cannes for his performance, a phenomenal achievement for a 27-year-old.

It’s impossible to discuss Whitaker’s acting achievements without referring to “The Last King of Scotland”. As Ugandan dictator Idi Amin, Whitaker’s ferocious performance handed him nominations and wins for pretty much every acting award in the book.

Acting opposite James McAvoy, Whitaker’s Amin is an incredible creation. He fills the character with all the menace and terror that the dictator deserved. But Whitaker still finds room to discover the humour and charm in what many would consider a one-dimensional evil character.

Another early role for Whitaker. This time he plays alongside Robin Williams, who turns in a career highlight as the errant radio DJ to US troops in Vietnam. Williams won a Golden Globe for his performance, but Whitaker's Private Edward Garlick and his often spontaneous reactions to Williams provide the film with its heart.

Whitaker’s performance in Good Morning, Vietnam is a masterclass in acting as reacting. Opposite the undeniable performance of Williams, many actors would shrink into the background, but Whitaker is as essential to the film’s brilliance by playing the perfect support.

Whitaker received another deluge of acting nominations for his role in “Lee Daniels’ The Butler”. From the director of Precious, The Butler tells the story of Cecil Gaines, a fictional version of Eugene Allen, a black butler who worked in the White House from 1952 to 1986.

Few roles give an actor such a plethora of emotional historical roles to react to, especially alongside a supporting cast that includes Oprah Winfrey, Mariah Carey, Vanessa Redgrave, Lenny Kravitz, Robin Williams, Alan Rickman, and Jane Fonda, to name just a few. Even among this grab-bag cast bursting with talent, Whitaker shines. His portrayal of ageing in America is haunting and mature throughout.

If you’ve not heard of this one, it may seem like a joke addition on the list. But stay with us. Directed by Cannes darling Jim Jarmush, “Ghost Dog” is a classic example of the director’s irreverent postmodern approach to humour and genre.

In the film, Whitaker plays Ghost Dog, a hitman who lives by the ancient Japanese code of the Samurai. Ghost Dog is most likely insane as he commits increasingly violent acts, but Whitaker plays it straight down the line. Without seemingly trying, Whitaker is the perfect comedy foil for this avant-garde satire.

Whitaker is so good, you might just believe him as a true Samurai come the film’s end.

'Father and Soldier' shines a light on French colonialism at Cannes