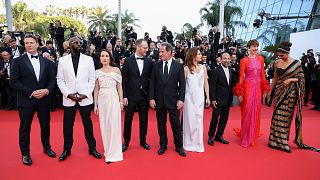 Ukrainian President Volodymyr Zelenskyy made a special appearance during this year’s Cannes Film Festival opening ceremony, delivering a powerful speech about the power of films and the need for cinema to take a stance in the “war for freedom” Ukraine is fighting against Russia.

Addressing the festival in a video he delivered in his signature military green shirt, much as he did at the Grammys in April, Zelenskyy spoke about the political responsibility of cinema and invitied filmmakers to rise to the occasion.

The Ukrainian president mentioned the role cinema has historically played in supporting both dictators like Hitler, who used film as a propaganda tool for his terrible political messages, and dissidents like Charlie Chaplin, who made a bashing satire of Hitler’s regime in his “The Great Dictator”.

Zelenskyy then quoted the powerful final monologue from Chaplin’s “The Great Dictator”, calling for “a new Chaplin” to emerge now.

“The hate of men will pass, and dictators die, and the power they took from the people will return to the people. And so long as men die, liberty will never perish,” Zelenskyy quoted Chaplin.

Talking to the crowd, Zelenskyy also quoted the infamous line from Francis Ford Coppola’s masterpiece 'Apocalypse Now,' “I love the smell of napalm in the morning” and drew a comparison to the Russian invasion.

He finally asked for filmmakers and actors around the world to use the power their work grants them to support Ukraine’s fight for freedom.

“On February 24, Russia began a war of huge proportion against Ukraine with the intention of going further into Europe … Hundreds of people die every day. They are not going to get up after the end,” Zelenskyy said during his address to Cannes.

“Will cinema stay silent, or will it talk about it? If there is a dictator, if there is a war for freedom, again, it all depends on our unity. Can cinema stay out of this unity? We need a new [Charlie] Chaplin who will prove that, in our time, cinema is not silent.”

Zelenskyy signed off with a positive note. “I’m sure that the dictator will lose,” he said. “Glory to Ukraine,” he signed off.

His speech received a standing ovation from the crowd of filmmakers, actors, press and festival attendees who were there to mark the opening of the 75th edition of the festival.

The opening ceremony took place in its original fanfare after two years that saw one edition completely cancelled and another one significantly slimmed down.

Official opener actor Julianne Moore said it was an honour to be on stage to “celebrate freedom, creation, audacity and peace.”

The war in Ukraine is expected to play a significant role in this year’s Cannes festival, with organisers excluding Russian delegations and adding screenings of several Ukrainian films.

French actor Vincent Lindon, who will be leading the jury at the festival, said the conflict in Ukraine “tortures my conscience.”