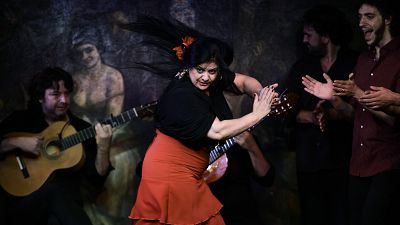 Madrid's most talented flamenco artists take to the street as part of the city's flamenco festival   -   Copyright  Gerard Julien/AFP
By AP  •  Updated: 17/05/2022

After a two year absence due to the pandemic, 'Flamenco Madrid', the city's flamenco festival, is back, and more vibrant than ever.

The tradition, passion, colour and movement of flamenco takes to the streets, as singers and dancers perform for the public.

This year marks the 6th edition of the Spanish capital's beloved festival.

"Bringing flamenco to the streets is one of our main goals when it comes to finding the connection between art, culture and citizenship," says Ángel Rojas, director of Flamenco Madrid festival.

The fire of flamenco

The term ‘flamenco’ is used to describe a combination of both modern and traditional musical styles typical of southern Spain. The art form combines singing, dance and musical accompaniment (called cante, baile and toque).

Formed in the southern Andalusian region of Spain, flamenco is an intrinsically Spanish art form, although its roots lie in the complex multi-cultural and ethnic society of the south of Spain from the 16th and 17th centuries.

The director of the festival believes flamenco is something that cannot be rationalised or sorted, he defines it as "pure fire".

"I believe that the truth that emanates at that moment is what flamenco captivates," says Rojas.

Flamenco dancer Lucía Álvarez, also known as "La Piñona", says that when the flamenco magic arises (known as duende), it's like experiencing a trance: "It is an uncontrollable mental state, it is like a meditation, you are somewhere else. That is very nice and for those minutes it is worth being in this profession."

One of this year's most unique performances is Pájaros Flamencos (Flamenco Birds), which features six singers performing outdoors, on bridges by the river as if they were birds singing from one side to the other.

Gabriel de la Tomasa, singer with Pájaros Flamencos, explains flamenco is his way of life, his way of expression "because it is the seed that my family instilled in us". It's something anyone can feel and enjoy he adds.

The 'Flamenco Madrid' festival will run until May 29.

What accusations has Amber Heard actually made against Johnny Depp?