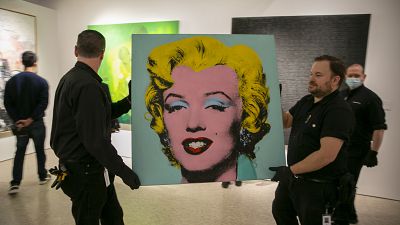 The Andy Warhol painting has become the most expensive 20th-century artwork ever to sell at auction   -   Copyright  Ted Shaffrey/AP
By AP/AFP  •  Updated: 10/05/2022

A famous portrait of Hollywood icon Marilyn Monroe by pop art legend Andy Warhol sold for a record-breaking $195 million (€185 million) on May 9.

It sold in four minutes at Christie’s headquarters in Manhatten, New York.

"We did sell the most expensive painting of the 20th century. I'm very proud of that,” Alex Rotter, Chairman of Christie's 20th and 21st-century art department told The Associated Press. “This is a big achievement that is not on me, but just on Warhol and Marilyn … Let it sink in, it's quite something."

Christie's said an unnamed buyer made the purchase.

The profits of the monumental sale will go to the Thomas and Doris Ammann Foundation Zurich, which put the painting up for auction. The foundation helps children with health care and educational programs.

The Marilyn Monroe you may not know