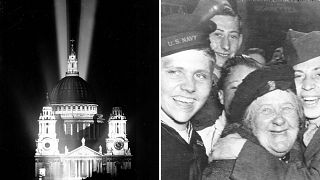 Victory in Europe Day (VE Day) is celebrated every year on 8 May. It's the annual recognition of the end of the Second World War, one of the darkest periods Europe has ever seen.

VE Day is on the 8th to coincide with the anniversary of Germany signing an act of military surrender. Adolf Hitler committed suicide on 30 April 1945, and a week later on 7 May, Karl Dönitz signed an unconditional surrender to come into effect on the 8th.

However, because USSR leader Josef Stalin wasn't present and wanted his own ceremony, a second unconditional surrender was signed on May 8. Because of this, Russia celebrates VE Day on 9 May.

Now, 77 years ago, we look back on some of the revellers that celebrated the end of Europe's darkest chapter.

Paris was unsurprisingly full of celebrating people. Having endured the fascist Vichy government allied with the Nazis, French people burst onto the streets to celebrate. Above are thousands of people at the Arc de Triomphe and below we see people congregating at the Champs-Elysees.

Finally past the bombardment of the Blitz, London's St Paul's Cathedral creates an astonishing "V" sign in light, signalling the end of the war.

Many children like these would have only known a country at war by the time VE Day finally arrived.

Above revellers gather around Piccadilly Circus in London and below there is a celebratory meeting between Prime Minister Winston Churchill and King George VI at Buckingham Palace.

Taken a few weeks later, a massive transit of soldiers make the return journey to the US after fighting in Europe. Many of them would have never left the US before.

For the first time in years, unabashed joy was seen on every face in photos. Before shipping off home, a group of young US soldiers embrace a British woman in the streets.

Celebrations continued around Europe. People crowded to the centre of cities such as Copenhagen.

Here's a view to some more of the celebrations as they happened on this day in 1945.

All of these archive images bring a past that may sometimes seem of a different world back to life. Suddenly, we can people like us reflected in these images of jubilation.

Take a look at this stunning Water Light Festival in Italy