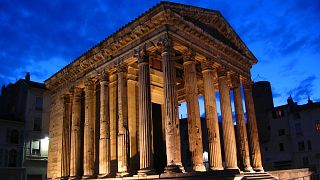 As the town of Vienne wakes up on a spring Saturday, market traders put out their wares. And there's one face you are guaranteed to see amongst the early visitors.

When I catch up with him, he's buying squash. "You can use the skin of this one. It's very tasty, like a noisette," he says while handing over a fistful of euros to a man in a thick coat I wish I could borrow. "I will cook chicken with this, and make stock. The chicken comes from a local guy. Very nice chicken."

He walks around a corner, saying hello to people as he goes and sometimes stopping for a chat. The sun is getting high enough to feel as we reach a cheese truck.

"This man is from 20 minutes up the road from here. They have around 80 animals. Very nice cheese."

He tells me more about the indigenous ingredients of the area.

There is a small goat's cheese with subtle aromas of hazelnut, mushrooms and butter called The Rigotte of Condrieu. "Rigot" refers to the small streams that run down the slopes of the Pilat massif where it is produced.

The 'Burlat cherry' is named after Léonard Burlat, an amateur arborist who, in 1915, noticed a wild cherry tree in a hedge, near the factory where he worked in Lyon, and then grafted it onto a cherry tree in his orchard in Loire-sur-Rhône. A decade later he presented the fruits of his labour to the Société pomologique de France, which confirmed his triumph.

Girardon points out a heart-shaped neufchatel cheese. "Some people bring flowers back for their wives, I bring this. But I don't make mistakes."

Girardon calls this market his 'inspriation'.

This is romantic. The vision of a brilliant, celebrated chef amongst his people, knowing his suppliers, creating dishes in his mind as he passes another selection of squashes, a ocean of endives, ashen goat's cheeses from Isère.

He bumps into the mayor and they have an extended conversation while I pop into a corner cafe for a hot drink in the company of seniors warming up for a crunch petanque match later in the day.

I will be back with Philippe for lunch.

The Rhone Valley sits between France's eastern gateway to the south, Lyon, and the Mediterranean. The region boasts some of the world's best and most talked-about wines and is a go-to destination for foodies.

And despite the northern end of this huge swathe of land still being comparatively undiscovered, it is in fact been steeped in history and gastronomy for 2,000 years.

Before the Romans settled on the banks of the Rhone in what is now Vienne, the city was a major settlement for a Celtic tribe called the Allobroges. In 121 BCE, the Romans arrived, and stayed for around 400 years. Indeed the impressive temple in the city centre dates from the 1st century CE.

Directly across the river from Vienne is Saint Roman en Gal, which houses an extraordinary museum dedicated to the Roman period of the Rhone Valley's development as a cultural centre, trade port and civilisation.

Intricate floor mosaics and large frescoes that display the daily lives and passtimes of Ancient Gaul are on show in the roomy halls of this diverting museum, but the real joy is walking down a ramp to the excavations outside.

A seven-hectare space speads out in front of you as the uncovered town takes shape. You tread the original stone road, hop over manholes that lead to the pioneering sewage system, and marvel as the sight of a two-millenia-old villa is pieced together.

But it could so easily never have been found.

In 1967, the local authorities were on the verge of building a school here. Historians knew very well that this area had been occupied during antiquity, but they had only envisaged a collection of dwellings scattered about the river banks.

But to their enormous surprise and delight, when archaeologists began the excavation project, they discovered the vestiges of an entire city.

As you wander back towards the museum, a large facsimile of a Roman wine press reminds you of one of the key focuses in these times, and back inside you find the scale model of a boat carrying amphorae.

There is a clear correlation between enjoying life and enjoying gastronomy all these years ago. And settlements on the vibrant banks of this river were great centres of conviviality. Wine glasses and dishes are depicted alongside joyful people in the illustrations and scuptures of the time, and our good friend Bacchus, the god of wine, is always lurking menacingly somewhere.

Every September, the Vinalia Festival on the site is dedicated to the reconstruction of Roman grape harvests and antique cooking. Visitors can take part in the various stages of the wine production, taste typical dishes of the time and, of course, drink.

Wine from this area is perhaps less commonly well known than its Southern Rhone neighbours. But it deserves to be on the same footing at least. The nectar of the Gods has been made in the Rhone Valley since before the Romans even arrived, the slopes towering over the winding river giving the perfect topography for grape growing.

One name you will hear is Côte-Rôtie, which means 'roasted slope'. These crumbling granite cliffs mark the land of Syrah. It's the only red grape you find for serious production in the Northern Rhone. The white varieties of Viognier, Marsanne and Rousanne have their own charm and also find their perfect expression amongst the terraced perches, where the best solar exposure is to be found.

The name Guigal is synonymous with Côte-Rôtie and you can hardly miss the enormous sign as you drive towards Ampuis. They have a tasting room at the Caveau du Château in Ampuis itself, which also incorporates a wine museum.

Since the winemaking and marketing efforts of Marcel Guigal in the 1980s, this appellation has become less of a niche area in the wine industry and found its place at the world wine table. Guigal began to bottle by vineyard, a practice used in Burgundy.

He also bumped up the oak ageing to three and a half years. The resulting wines are characterised by finesse and can be enormously expensive, with even an entry level bottle weighing in at around €40.

But there are a number of much cheaper alternatives that qualify for the Cotes de Rhone status, which are incredibly drinkable for a fraction of the price of a Côte-Rôtie or Condrieu. The latter is an entirely white appellation made exclusively from Viognier. It is extremely floral with a nose in some cases akin to cake.

If you're visiting the area, there are plenty of opportunities to stop off and taste some wines in order to understand the terroir. One of the friendliest is Domaine Corps de Loup, who have a small but siginificant range of wines including Côte-Rôtie and Condrieu offerings.

Wine, as we know, goes best with food, and if they're both local then you've hit the jackpot. The Roman settlers realised this land gave them everything they needed, and this is still true today.

At Domaine Clairefontaine, Chef Philippe Girardon has his own empire. A Michelin-Starred restaurant, a bistro and a range of accommodation.

"Do you like truffle?" he asks. And what ensues is a special truffle menu to remember for ever.

The bright room is lit today by the bright sunshine streaming in through tall windows, but this luminosity is enhanced by furniture, frames and fittings that have a contemporary design yet posses the stability of an established history. The light fittings where the light source is obscured are thought-provoking, like the cuisine of this meticulous yet eye-catching chef.

There's a purity at work here. A concentration on bringing out the flavour of each dish's star ingredient. The scallop carpaccio is elevated with Calamansi lemon, truffle oil and a beautifully acidic Granny Smith apple sorbet. Girardon's Blue Lobster quenelle was a stunning feat of amplification, paying homage to the Homard in the most complete manner.

This one comes with a 2020 Condrieu Clos Poncins. A big old waxy finish full of candied orange and honey ensures this wine doesn't get lost on the sea bed.

But what would a Michelin-starred lunch be without a dash of innovation?

With the use of a 3D printed mould, created from a large truffle, Girardon and his team put on some magic for dessert. Entitled simply 'A Truffle Mousse', the truffle beats the eye and you break the chocolate shell with a yelp of admiration.

Walking out of the main dining room I see three families who have also just had lunch. They are relaxing and watching a Six Nations rugby game. In Roman times, right on this spot, it might have been a wrestling match.

His service over, Philippe chats with the adults and the kids, then stands at the back of this anteroom, arms folded, watching the TV. I suspect he has one eye on the families, on the satisfaction he has created. His food and wine choices have inspired conviviality and proved that fine dining can be for everyone.