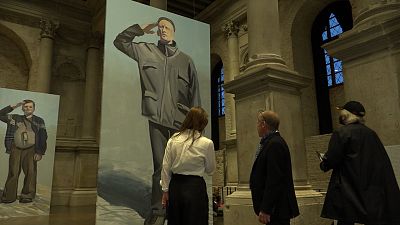 Among the collateral events at the Venice Biennale International Art Exhibition is This is Ukraine: Defending Freedom.

Both engaged and artistic, it’s a project of monumental proportions, showing in one of Venice’s largest buildings: the Scuola Grande della Misericordia.

The exhibition mixes Ukrainian art past and present with works by some of the world’s greatest contemporary artists. The Viktor Pinchuk Foundation has backed it and at the opening Pinchuk brought a message of support from Ukrainian president Volodymyr Zelenskyy.

Zelenskyy described the exhibition as a way for people to feel what it means for Ukraine to defend freedom, saying art can convey emotions in a way no other media can.

Art can tell the world things that cannot be shared otherwise. It is art that conveys feelings.

“It is unlikely there has ever been one year on planet Earth when one nation hasn’t been fighting for their freedom,” he said in a video address. “But there have been many years when most people took no notice of those fighting. This is what gives tyrants hope.

“Art can tell the world things that cannot be shared otherwise. It is art that conveys feelings. If you are free yourself, how can you understand other people who fight for their freedom? If you live in a country at peace, how will you empathise with those who can only dream of peace, and help them? How can you thank those who fought on their soil – for your freedom? Every single one of these questions is about art.”

Among the works on display, Mothers (2019), presents 300 portraits of mothers who’ve lost a child on the Donetsk and Luhansk fronts.

The show was assembled in double-quick time in response to February’s invasion of Ukraine, thanks to the work of Kyiv’s PinchukArtCentre.

"In a very short time, we pulled this exhibition in four weeks”, said Björn Geldhof, Artistic Director of the PinchukArtCentre. “The intention was to represent Ukraine in the best possible way. Not only in a contemporary sense, but in a historical sense, because Putin started by saying Ukraine is no culture, Ukraine is no country. And I think this exhibition proves we have a culture that is deeply rooted, we have a culture that have history.

"But also it's important to have these international voices to rally around Ukraine in a sustainable way."

Damien Hirst and JR among the exhibitors

Damien Hirst has contributed with Sky Over Corn Field (2022).

So too has the French artist JR. In March he installed a giant portrait of a Ukrainian girl, Valeriia, in Lviv’s main square. A photo of that work is now on display in Venice.

"I brought this giant picture there because I wanted Russian planes to see who they were shooting at every day and that's why we spread it out, a 45-meter long picture, right in the heart of a city,” he said.

“You can't miss it, flying over the city, which had in fact just been bombed the day before. So it really was a grassroots way, with the means we had, of making people realize who is being affected by this, notably children. Little Valeriia is safe and sound now, she is on the other side of the border with her mother. But her family - her father and her brother - are still in Ukraine."

Lesia Khomenko has left her husband behind, fighting in Ukraine. She’s painted him in a giant format alongside lawyers, engineers and musicians, who are all now soldiers.

"I understand art only as a political activity,” she says. “Art for sure can't compete with such reality, and reality deals now with death, of a lot of people, of civilians. I think reality is more powerful than art,  especially because Ukrainian reality is so surrealistic."

As a man, Nikita Kadan had to obtain special authorisation to leave Ukraine. He accumulates evidence of war In his work, a project he begun in Donbas in 2014.

This is Ukraine: Defending Freedom is one of the major events of the 2022 Biennale - and is on show in Venice until August 7th.