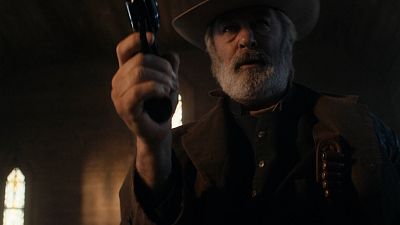 Police have released never-before-seen footage from the aftermath of the shooting on set of the Alec Baldwin film 'Rust'   -   Copyright  AP Photo
By AP  •  Updated: 26/04/2022

Law enforcement officials have released new footage showing the aftermath of a fatal shooting last October on the set of the Alec Baldwin film Rust.

At a ranch on the outskirts of Santa Fe on October 21, a gun Baldwin was holding as part of a scene went off, killing the cinematographer Halyna Hutchins and wounding the director, Joel Souza. They had been inside a small church during the set-up for filming.

Baldwin has previously stated that he did not pull the trigger and had no idea how a live bullet came to be on the set.

What does the police footage show?

The new videos released by the Santa Fe County Sheriff's office show officers and paramedics arriving on the chaotic scene shortly after the shooting.

They also include a hospital bedside interview with director Joel Souza. "I remember the armourer handed the actor a gun," Souza says.

"I don't know if she said it was cold or clean. But she handed him the gun and then there was a bang, it was a louder bang than I'd ever heard from a blank before."

Other clips show Baldwin talking to investigators within hours of the fatal shooting inside a compact office, as well as rehearsal shots showing Baldwin in costume, practicing a quick-draw manoeuvre with a gun.

In an accompanying statement, Santa Fe County Sheriff Adan Mendoza the probe is still ongoing and officers are still waiting on the results of ballistics and forensic analysis from the FBI, as well as studies of fingerprints and DNA.