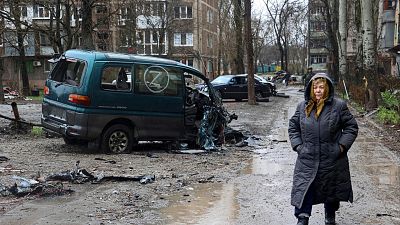 Acclaimed French director Michel Hazanavicius has changed the title of his latest film to avoid association with Russian war vehicles.

Hazanavicius’ next film was due to be titled “Z (comme Z)” or “Z (like Z)” in English, until Ukrainian filmmakers pleaded for him to change the title.

The reasoning for the request is the use of the letter “Z” by the Russian army in their invasion of Ukraine. Ever since the beginning of the war, Russian soldiers have painted the letter on the side of tanks and other armored vehicles that have been sent into Ukraine.

Russia’s war and the letter “Z”

The letter “Z” isn’t part of the Russian cyrillic alphabet and the origin of the symbol is unknown. One predominant theory is that the letter is painted on vehicles to avoid friendly fire.

But since the beginning of the war, Russians have begun to associate the letter with support for the invasion. Kremlin-funded news network RT has started selling Z merchandise, and the letter has been painted on buildings and been the focal point of flashmobs.

Outside of Russia, the symbol has become emblematic of a totalitarianism and Putin’s unjust war on the people of Ukraine.

Last week, Lithuania joined Latvia and Moldova in banning the use of the sign altogether.

The use of the symbol to justify military aggression and war crimes will now result in a substantial fine in all three countries, as it is included in a list of banned symbols such as the Nazi swastika.

Germany is also in the process of considering a similar ban.

Reaction and a new name

“In view of the symbolic charge taken by the letter Z since the beginning of the war in Ukraine , and at the request of Ukrainian filmmakers, I decided to change the title of my film,” Hazanavicius said in a press release.

“This title may have been funny when we finished the film a few months ago, but it's not funny anymore, and I can't take it. My film is made to bring joy and in no way I wouldn't want him to be associated directly or indirectly with this war.”

“I am therefore very happy to change it (of title, editor's note), and to this extent to mark my most total support for the Ukrainian people,” he concluded.

Hazanavicius gained international fame for his 2011 black-and-white silent film, “The Artist” which was nominated for ten Oscars and won five including Best Picture and Best Director.

The film, a zombie comedy starring Bérénice Béjo and Romain Duris has been renamed as “Cut!”.

Cut! will be first shown at the opening of the 75th Cannes Film Festival on May 17.