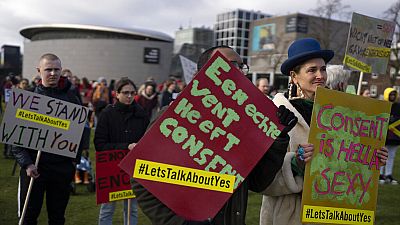 Revelations about alleged sexual misconduct at The Voice of Holland sparked hundreds-strong protests in Amsterdam in January   -   Copyright  Peter Dejong/AP   -
By Euronews  •  Updated: 26/04/2022

Dutch prosecutors have confirmed a criminal investigation is under way into alleged sexual misconduct linked to TV talent show The Voice of Holland (TVOH) after the country's first major #MeToo scandal earlier this year.

In a statement this week the Noord-Holland prosecutor’s office said four people had been designated as suspects, linked to five reports received.

TVOH was suspended in late January after a documentary was published by the YouTube news channel BOOS (the Dutch word for “Angry”) alleging sexual misconduct behind the scenes, including the exploitation of young female contestants and colleagues.

Who has been accused of sexual misconduct?

Earlier on January 15, Jeroen Rietbergen, the show’s bandleader, abruptly resigned. In a statement, he said he had had “contact of a sexual nature” – namely sending explicit pictures and messages – with women involved in the show.

Rietbergen is the brother-in-law of the show's creator, the Dutch media tycoon Jon de Mol. In his own response to the scanfal, De Mol said he agreed with Dutch broadcaster RTL’s decision to pull the programme.

“First, I was speechless, then I became livid,” he said of his brother-in-law’s admission. Directors had put Rietbergen on notice and apologised to the victim, he said, but did not fire him or launch a wider probe.

“I absolutely feel responsible,” he said after the BOOS programme aired in January. “That doesn’t mean that I saw things and tried to cover them up.”

Apart from Rietbergen, three other TVOH figures accused by multiple women of inappropriate behaviour were two of the jury members, the Dutch rapper Ali B and singer Marco Borsato, and an editor at the voice so far named only as Martijn N.

All three have denied the allegations and Dutch prosecutors this week did not name those being investigated, or the substance of the complaints filed.

The statement did, however, add: “The Noord-Holland prosecutor's office has launched an investigation against one of the four suspects in response to a sexual offense that was reported shortly before the broadcast of BOOS. This concerns a suspicion that is separate from The Voice Of Holland.

“The cases against the other three suspects are being investigated under the supervision of a public prosecutor of the Central Netherlands Public Prosecutor's Office.”

The show’s producer, ITV Studios, had already commissioned an external investigation into the allegations in January. The Dutch police received five reports that compelled the criminal inquiry.