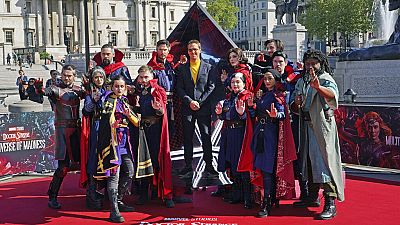 Actor Benedict Cumberbatch poses for a photocall with cosplayers in London ahead of the release of 'Doctor Strange in the Multiverse of Madness'   -   Copyright  Ian West/AP
By Euronews  with AFP  •  Updated: 26/04/2022

Disney is understood to have rebuffed a request from Saudi Arabian authorities to cut "LGBTQ references" from the latest film in the Marvel franchise.

Before 'Doctor Strange in the Multiverse of Madness 'can be shown in cinemas in the ultraconservative Kingdom, a scene of "barely 12 seconds" would need to be excised, the country's head of film classification Nawaf al-Sabhan told AFP.

The scene in question sees lesbian superheroine America Chavez refer to her "two moms". "It's just LGBTQ references," Al-Sabhan said. "In the Middle East, it's very difficult to get something like that across."

So far, he added, Disney had replied "not willing" to make the requested deletions. "There's no reason to ban the film," he said. "It's just an edit...So far they've refused. But we haven't closed the door. We keep trying."

Homosexuality is a capital offense  in Saudi Arabia, which continues to enforce its particular, strict interpretation of Islamic law despite some reforms in recent years.

It was only in 2017 that the authorities lifted the cinema ban, with the first theatres - beyond a single IMAX cinema for educational films - opening in spring 2018.

This is also not the first time a Marvel film has been censored in Saudi Arabia. The 2021 film Eternals was ultimately not screened in the Kingdom or several other Gulf countries due to featuring a homosexual couple.

IMAX also confirmed yesterday that the new Doctor Strange film will not be shown in Egypt. No reason was given but Egypt has a long record of human rights abuses of LGBT people and censorship is similarly rife.

The Walt Disney Company has yet to comment on the latest dispute.