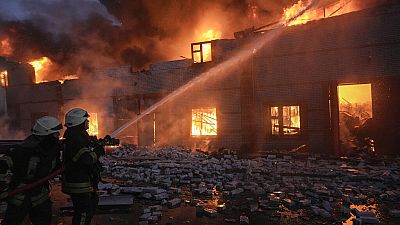 Ukrainian firefighters tackle a blaze on the outskirts of Mariupol after the Russian airstrike on March 16 that destroyed the city's Drama Theatre   -   Copyright  Vadim Ghirda/AP   -
By Euronews  •  Updated: 26/04/2022

Ukrainian art historians and specialists will join a panel discussion tomorrow night on the damage done to the country's cultural heritage by the Russian invasion to date as UNESCO released its latest findings.

People are invited to join a Zoom webinar from 8pm CET on what has been happening to the art, museums and monuments of the country since the war began on February 24, and what is being done to salvage them.

Hosted by the International Foundation for Art Research (IFAR), the speakers will include the journalist and historian Konstantin Akinsha, an expert in World War II art expropriations, and Valentyna Bochkovska, director of the Museum of Books and Printing of Ukraine in Kyiv.

On Monday the IFAR published a list of 24 organisations and online resources supporting the effort to protect cultural heritage in Ukraine for as long as the war lasts. "Ukrainian monuments and at-risk sites have been mapped with satellite imagery," the group said in a statement last month, "but mapping alone will not save them."

As of yesterday, UNESCO had confirmed damage to 110 different cultural sites since the onslaught began. They included 10 museums, 22 historic buildings, 13 monuments, 48 places of worship and six libraries.

Twenty-five of the blighted sites were in the Donetsk region alone, including 16 in the besieged city of Mariupol. The monument to Metropolitan Ignatius, one of the founders of the city and its heavenly patron, was destroyed three days ago.

The Museum of Local Lore and Kuindzhi Art Museum were both destroyed in air strikes on March 21. The city's Palaces of Culture, several churches and a cluster of historic dwellings have also been damaged or flattened.

In the Kharkhiv region some 31 heritage sites are now known to have been damaged, including the Drobytskyi Yar Holocaust Memorial and a a memorial to victims of totalitarianism on the Belgorod Highway. Twenty ruined sites were recorded in the Kyiv region.

Earlier this month Eloundou Assomo, director of UNESCO's World Heritage Centre, warned that the deliberate destruction of known cultural sites - marked by UNESCO with an internationally-recognised blue shield emblem - could be a war crime.

"We know that cultural properties are targeted because they represent the soul of a society," he said. "Since the beginning of the war in Ukraine, it is a race against time.

"Fortunately none of the seven World Heritage Sites in Ukraine have been targeted. We are in regular contact with Ukrainian professionals and authorities, specifically with the deputy minister of culture, Kateryna Chuyeva, to assist the museum officials, heritage custodians and civilian volunteers to safeguard cultural treasures from the shelling to the best of their capacities."

For information on the April 27 panel discussion click here.

Global Geoparks: What are they and why should you visit one?