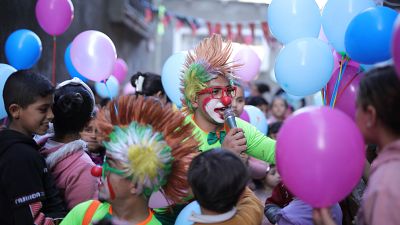 Ibrahim Al- Qarnawi wears his red nose and starts to play around. Children squeal with delight as the brightly dressed clown sings and dances. The 28-year-old is the founder of Al Nawruas Art Troupe in the Gaza Strip. Established nine years ago, the collective consists of storytellers, clowns and artists.

"I thought of becoming a clown when life was hard for me," explains Ibrahim, who was born in the Al Bureij refugee camp in Gaza. "Why not become a clown and put on a funny voice, wear a teddy bear costume and act as a storyteller to make people laugh," he tells Scenes.

Uncle Hema is the stage name for Ibrahim. Culturally in Gaza, elders are referred to as 'Uncle' as a sign of respect. "I am loved among children and every child who sees me runs up to me saying, 'Uncle Hema, Uncle Hema'," Ibrahim recounts as he reflects on the appreciation of his young audience.

Musa Ali Al Sammak joined Al Nawras Art Troupe two and a half years ago and took on the role of a teddy bear. "I act to the children in its character to make them laugh. I play, move and dance with them," he explains. "It's a wonderful feeling when you see a child smile. It feels like you've done something big," the 21-year-old adds.

During Ramadan, Ibrahim is also a Mesaharati. A Mesaharati is a person who wakes others up before dawn to eat before starting their fast. The honoured tradition has been around for centuries and still continues to this day. Every morning whilst others are fast asleep, Ibrahim gets ready. "I wear the Mesaharati costume, the distinctive fez and the Syrian suit and head out to the east of Al Bureij camp."

Walking up and down the camp, he bangs a drum to wake people up. The children are always excited to see him. "The children call out 'Uncle, Uncle, say my name'," he explains. He then loudly announces the child's name as if they were regal and compliments them with kind words. "The child is happy and waits for me till the next day to call on him again. So every year the children wait for Ramadan, for Uncle Hema Al Masaharati," relates Ibrahim.

For children in war-torn Gaza, smiling is something of a rarity. Years of conflict have had a detrimental impact on the children's mental health. According to UNICEF, one in three children require support for conflict-related trauma.

"I worked in all areas of the Gaza Strip, and in every place, there was a child with great sadness. A child needs someone to comfort them, make them feel happy and escape the circumstances they live in," says fellow clown and troupe member Ahmed Abu Sukar. "That is why we as clowns in Gaza must put a smile on the faces of all the children of Gaza," he adds.

There are two Eid festivals in the Islamic calendar. Eid Al Fitr, which marks the end of the month of Ramadan and Eid Al Adha, which is celebrated after the annual pilgrimage of Hajj. The Gazan troupe creates parties for each Eid celebration. "In each season, we have a special costume, such as Eid Al Adha, there is a big sheep and a small one to make the Gazan children happy," says Ibrahim.

Ibrahim and his troupe are determined to provide the children of Gaza with a moment of happiness. "We make the children so happy that they forget the conflict, bombings and destruction," says Ibrahim.