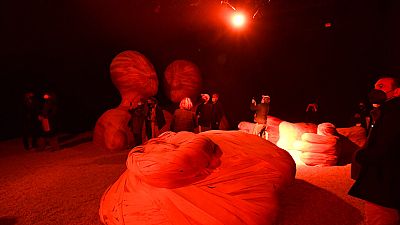 The 59th Venice Biennale art exhibition has opened, showcasing some of the best new pieces from around the world.

For more than five months, Venice's regular tourists and art lovers will be able to get an idea of the state of the world, through the prism of artists from across the globe.

This year, the theme is "The Milk of Dreams", aiming to re-enchant a world in the midst of ecological and political upheaval.

The curator of the event Cecilia Alemani told Euronews what was behind the title.

"It tells the story of this world where there are hybrid creatures, magical beings and it celebrates a sort of freedom of spirit that I miss a lot."

"The title gets interpreted in many different ways (...) but I think it shows also the role of the oniric dimension, and a sort of surrealism in the show," Alemani explained.

The event is organised by country, with each nation getting its own pavilion to showcase its artists' best works.

All of the exhibits are housed in the Giardini and Arsenale areas of Venice, a tranquil garden area and sprawling historic industrial site in the city.

Closer to reality, the war launched by Russia against Ukraine has influenced some of the exhibitions this year.

While Russia's pavilion has been left empty, the Ukrainian one is teeming with people.

Artist Pavlo Makov is exhibiting his fully functional art object, "The Fountain of Exhaustion, Aqua Alta", which was being shown in Kyiv when Russia invaded Ukraine in February.

The artwork that has been in the making since 1995 was miraculously reconstructed in Italy in record time, but Makov's thoughts are very much anchored back at home.

"I was born in Russia but since three years old I am living in Ukraine. For me, the citizenship means -- actually for all of us in Ukraine means practically everything," Makov said.

"It's an Ukrainian pavilion, like any other pavilion it's first of all a representation of the country, and I felt myself much more a citizen at that point than an artist. Like I always say, behind every kind if war there is always a cultural conflict, and that's what we definitely have now."

And the focus on Ukraine doesn't end there. At the Scuola Grande della Misericordia, a historical museum in the island-city, another exhibition showcasing Ukrainian culture begins this weekend.

'This is Ukraine: Defending Freedom' aims to champion the work of contemporary Ukrainian artists, showcasing its cultural resilience over hundreds of years of turbulent history.