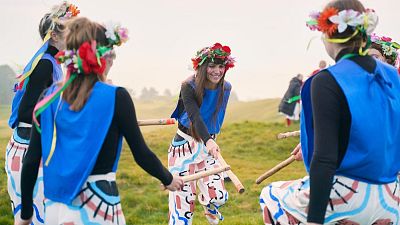 There might be nothing more quintessentially English than Morris dancing, a folk tradition that stretches back hundreds of years where men dressed in white wave handkerchiefs or tap sticks together, and dance around with bells on their knees.

It's a jolly spectacle, perhaps best enjoyed on a fair summer's day with a pint of something cold in hand.

The period after WWII saw a renaissance for heritage customs in England, and by the 1960s Morris dancing's popularity reached its 20th century peak -- but it was very much still a men-only activity, until recently.

The Boss Morris group is one of England's most prominent all-female Morris dance troupes. They specialise in the Costwold morris style of dance, but infuse their performances with striking costumes, vibrant makeup, bold colours and modern dance too.

"Traditionally it was a men's dance, with all sorts of true folk traditions it's got many roots and no-one's completely sure where it comes from. But it has been men that have done" says Lily Cheetham, one of the Boss Morris dancers.

"We still have hankies and we still have bells and a lot of our dances are still very much in the traditional nature. But we do have a very contemporary spin on it. Our costumes are very different from gig to gig and we've tried to take it a bit left-field I guess and move it on a bit."

It's only been relatively recently that women dancers have even been accepted for entry into Morris dancing's government body in England.

"Last time we checked I think more women were joining Morris dancing than men, so I think there's a misconception now that we're on our own doing what we do. Even where we live in Gloucester in Stroud there's another female group, and a mixed group" Lily Cheetham tells Euronews.

Boss Morris was first set up in 2015 by two sisters in southwest England, recently returned from their studies in London who convinced a number of friends to take part.

"It's just grown from there in an organic, collaborative way," says Cheetham.

"In terms of Morris dancing groups, some of the traditional sides" - the name for a troupe of dancers - "have been going forever, and we're still relatively new but we've packed a lot into that time" she explains.

The group performs at festivals and other events, and run workshops for beginners to learn more about the traditional dance.

"There is evidence to suggest that Morris dancing was a royal court dance, a real flamboyant dance where they had lots of spangly costumes, so it would have been seen in that capacity. Over the years it has amalgamated [with other dance forms] and there are lots of threads that have come down in the tradition from different aspects."

Although you're more likely to see Morris dancers from springtime right through to harvest, they also perform on the Winter Solstice where the white handkerchiefs were said to keep evil spirits away during the darkest days of winter.

"It does have that association with a British summer fête, but we do dance all year round," says Lily Cheetham.

"We've made our own calendar, so we tie in a lot with seasonal festivals, and we've made up our own traditions along the way."

Colombians dance, perform music during Carnival of Blacks and Whites