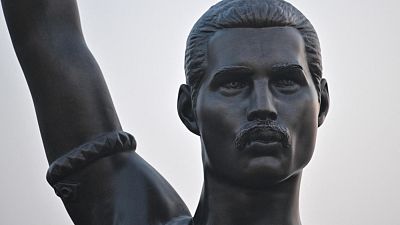 A South Korean businessman -- and Queen superfan -- has fulfilled his dream of building a life-size statue of  Freddie Mercury.

The 1.77-metre-high bronze statue of the singer raising his fist was unveiled on Thursday at the seaside in Jeju Island and cost 50 million won (€37,000).

Baek Soon-yeob first sent an email to the band back in 2014 asking for the rights to build the statue, which is now only the second in the world. The other statue is in Montreux, Switzerland, where the singer lived and recorded his albums.

Although South Korea is more associated with K-pop and its cult band BTS, Queen is hugely popular.

As a teenager, 57-year-old Baek Soon-yeob used to listen to pirated copies of Freddie Mercury's music, which was banned in 1970s South Korea, where the regime of military dictator Park Chung-hee also banned men from growing their hair.

Although his first emails to Queen to enquire about the rights to build a statue went unanswered, he wrote another email every month for seven years until finally in 2020 members of the band and its production company agreed to meet with him in Seoul, on the occasion of Queen's first concert in South Korea.

In South Korea, homosexuality is still a sensitive subject

Queen's first South Korea concert was organised after the phenomenal success of the 2018 film "Bohemian Raphsody", which told Mercury's life story and was seen by tens of millions of people in South Korea.

Mercury died of complications from AIDS in 1991.

Despite Queen's popularity in South Korea, Mr Baek faced opposition from some local residents when he was planning the statue. Some complained that "a statue of a homosexual" was being erected in their homes.

Although legal, homosexuality remains largely taboo in South Korea. Local TV station SBS was criticised last year for cutting a scene from "Bohemian Raphsody" in which actor Rami Malek kisses a man (the film was not censored on release).

Mr Baek said he hoped the statue would help "people who criticise sexual minorities to reconsider their views".

Some Queen fans travelled to Jeju to attend the unveiling. The band's guitarist Brian May assured them in a video message that he was with them "in spirit", and that Freddie Mercury would have appreciated the tribute.

"I'm sure Freddie is giving us his blessing from up there in heaven," said one fan, Kim Pan-jun, owner of a Queen-themed bar in Seoul.