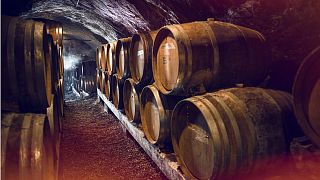 The phrase heard the most from visitors to the Swiss canton of Valais is "I had no idea there were so many vineyards."

Swiss wine is something of an enigma. Not many Europeans are aware of the sheer magnitude of winemaking in the alpine nation's most important wine-growing area, and why would they be? After all, tracking down a bottle in any other country is nigh on impossible.

The Swiss like their own wine so much that they don't let anyone else get a look in. Less than 3% of the wines produced in the Valais are exported, which is highly unusual for an area so dedicated to viticulture.

Swiss wine had its big turnaround point in the 1990s. Until 1985 there was wild over-production. So much so that the hectolitres of unsold wine, mainly Chasselas, was kept in state swimming pools!

The problem was rectified by moving to AOC wines, which means there are rules to follow. Gradually, quality went up, wine courses opened, and oenologists arrived. The government stopped buying up these literal pools of basic wine and liberalisation of importation came in. Foreign wines could be bought in Switzerland.

But the issue in this decade is that Swiss wines can rarely be bought as foreign wines anywhere else.

So where does it all go?

The Valais is the same size as Bordeaux's St Emilion region. That's about 5,000 hectares. Wine-wise, it's not that big.

"99% of Swiss wine never leaves the country," he says. "And the cost of production is too high to have prices that are interesting to supermarkets."

Swiss wine production doesn't quite make it into the top 10 countries in Europe in terms of volume. It produces just over one million hectolitres. To give you some perspective, the 10th largest is Georgia with 1.8m hl (hectolitres), and the largest is Italy with over 49m hl. A hectolitre is a unit equivalent to 100 litres.

Wine tourism is big business, and the Swiss are keen to show you their wares. But what makes it an uphill task is the lack of a constant market reminder. You visit the top three: Italy, France and Spain, and you learn about the terroir, the grape types, and what food it goes best with, then you return home and find examples in your local supermarket. Not the case with Swiss wine.

"Although we specialise in European wines (French, Spanish, Portuguese and Italian), Swiss wines have never been on our radar for us nor for our supermarket customers," she tells Euronews.

"It’s one of those regions where production is costly so the wines are expensive and only produced in relatively small volumes and a strong domestic market (not least ski resorts) soaks up most of the wines. There’s also a lack of knowledge amongst consumers – a vicious circle of unfamiliar grape varieties and appellations which aren’t well known because of the cost and availability barriers."

Asked if this could change, McCallion looks a short distance to the west for the possibility of export salvation. "The wines of Jura are getting a bit more of a hearing these days so maybe there is scope for other mountainous wine regions to offer up their wares."

Anyone who visits the Valais and tastes the wine at Mont d'Or or in the spanking new wine centre, Les Celliers de Sion, will see the high quality of the region's wines. But winemakers like Guidoux have overheads that push the price point beyond an easy sell.

McCallion has a point where varietals are concerned. The most celebrated grape at the Domaine Mont d'Or is called Johannisberg, which is a confusing misnomer to begin with. Lovers of Riesling will associate the name with Schloss Johannisberg, which is where the owners of the Domaine Mont d'Or went in the mid 19th century to bring back new grape varietals. And it wasn't solely Riesling they returned with. Johannisberg in the Valais is, in fact, Sylvaner.

Add to that the fact that the most widely planted grape in Switzerland, Chasselas, goes by the name 'Fendant' in this region and you can be sure that all but the most educated drinkers will not know what they're getting.

Rèze goes back to the early 14th century and produces a dry and highly acidic wine. Lafnetscha is the local dialect way of saying 'laff es nicht schon' (do not drink too early!). A particular favourite is the Petite Arvine. Its first recorded mention was in 1602 not far from Sion, and it's a real gift for a blind tasting as it has an unmistakable saline finish. Overall, 31 white varieties and 24 red are authorised in AOC Valais.

With so many grapes, there are some fascinating pairing opportunities, and a real favourite is Jacques Bovier's La Sitterie in Sion. A bijou but comfortable and bright dining room with impressionist seascapes at either end. His risotto with pumpkin, 64° egg and a raw cow's milk cheese called La Boule de Belp is as intense and warming as a small dish gets.

Bovier matched this with a 2019 Hummagne Rouge by Rouvinez. A rustic and somewhat wild beast.

Walk off your lunch

As well as the noble art of imbibing, one of the best ways to get to know Swiss wine is to hike. Many of the vineyards that overlook the valley floor are informative as well as picturesque.

If in doubt, you're probably seeing fields and terraces of Chasselas/Fendant, but winegrowers often label their rows and in some cases have made an effort to educate hikers as they traverse the ancient 'bisses'.

One of the ways you can explore this terrain is the annual Marathon des Saveurs (Marathon of Flavours) which takes place every autumn. Its increasing popularity has seen the organisers change from one course to two. The East route from Sion to Salgesch, and the West route from Sion to Chomason. To see footage of the 2019 Marathon which was run along the East route, click the link below.

If you want to take part in this year's event, registration is now open. Whichever route you opt for, you will see miles and miles of vines. It's just a pity that the wine from almost all of them never leaves the country.