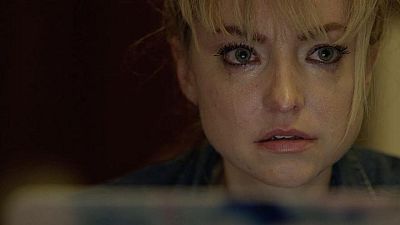 What happens when a social media addict goes too far and gets trapped by her own thirst for validation? That's the idea behind a new American thriller called "Follow Her".

The film premiered at Fantasporto, the International Film Festival of Porto, where it swept three of the top awards: best film and best actress, both in the Fantasy Film section, and the Audience Award.

Dani Barker wrote and starred in the film.

"It's really difficult to find a balance of posting things for yourself on social media when everything is catered around validation,” she says. All these apps, livestreaming, YouTube and everything else are built out of 'likes' and popularity, so it's really easy to get caught in that trap. I wanted to write something that showcased the challenges of that, of taking things a bit too far."

"I wanted a female lead, a female protagonist,” she says. “I didn't want gore, I didn't want the classic horror, I wanted more of a creepy thriller and I saw a lot I could do with the script. When Dani and I started talking, I could tell she was very collaborative and we would have a good relationship. I knew she wanted to star in it and I thought we could bring a lot to this."

Another highlight of the festival was "Jacinto", from Spain, Best Film award in the Directors' Week section, and a shared Best Actor award for the two male leads: Juanma Buiturón and Pedro Brandariz, for whom this was sadly a posthumous award, as he died in February from a heart attack at the age of 44.