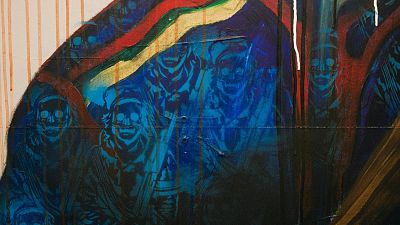 “We are slowly reclaiming and retelling our own story and reality.” This is how artist and writer Máret Ánne Sara sees art: a key tool in the struggle of the Sámi people in the face of ongoing colonialism claims.

For the uninitiated, this may be something of an unexpected statement. With the Nordic countries often held up as global peacemakers and a gold standard in the realm of democracy and human rights, claims of colonial occupation and aggression in the region may seem jarring.

For Máret Ánne Sara, and fellow artists Pauliina Feodoroff and Anders Sunna, however, they form the backbone of the artistic practice that they'll take to the Venice Biennale, which this year will see an historic first: the transformation of the Nordic Pavilion into “The Sámi Pavilion”.

This transformation celebrates the culture and sovereignty of the Indigenous Sámi people, whose ancestral lands (known as Sápmi) extend across large swathes of northern Norway, Sweden, Finland, and the Kola Peninsula in Russia.

“We consider ourselves a borderless people,” says Maja Kristine Jåma, the Norwegian Sámi Parliament Council Member responsible for culture and climate. Following earlier Christianisation with the arrival of missionaries in the 17th century, governments in Norway, Sweden, Finland and Russia pursued aggressive policies of assimilation from the 19th century until the 1960s, which variously involved the establishment of residential schools, the suppression of Sámi languages and removal of Sámi people from their lands.

The Sámi Pavilion comes at a critical juncture, with Truth and Reconciliation Commissions addressing Nordic colonialism underway in Norway and Finland, and under discussion in Sweden.

Despite an official end to such policies, Sara, Feodoroff and Sunna express a continued struggle to preserve Sámi lands, customs and language – the delineation of which is in itself alien to the Sámi worldview, which holds that the people are indivisible from the land.

“This western-style duality between nature and culture makes no sense from a Sámi perspective,” explains Director and Chief Curator of the Office for Contemporary Art Norway (OCA), Katya García-Antón, underlining that “the kernel of the Sámi perspective can be summarised in one sentence: ‘What happens to the land, happens to the people.’.”

“If we take care of the land, the land will take care of us,” comments co-curator and duojár (Sámi storyteller and knowledge-holder) Beaska Niillas.

“The beating heart of a living Sami culture”

The dissonance between Sámi and Nordic perspectives is perhaps best encapsulated in the fight to maintain the traditional Sámi occupation of reindeer herding.

“The government treats reindeer herding as an economy rather than a way of life,” García-Antón comments. Conversely, “reindeer herding represents the beating heart of a living Sami culture,” explains Sara, whose work evokes the problems faced by herders today: from the overprotection of predators under national laws (leading to increased numbers of lynx and wolverines), to forced culls and the placement of wind turbines on ancient reindeer migration routes through traditional Sámi lands.

With little heed paid to the recommendations of the Sámi Parliaments, which Sara believes merely serve as “an illusion of power within a democracy”, reindeer have lost access to large grazing areas and reindeer herders are forced to buy feed to help the animals survive. Many herders have been compelled to abandon their traditional livelihood to escape bankruptcy, with a mental health epidemic – born in part of such extreme pressures – particularly acute among young herders. Sunna compares the Swedish government’s approach to reindeer herding to “driving a car with your friend but your friend is deciding how you should drive, even though he doesn’t have a licence”.

Indeed, the alleged drive to build a green economy – and ignoring Indigenous Sámi knowledge in the process – is exacerbating the very issues it claims to mitigate, harming the land, animals and people that live there, Feodoroff argues.

Among the key themes of Feodoroff’s work are the industrial logging of Sámi forests, whether for the construction of wind farms or timber and paper production. The consequent soil erosion and flooding sees silt washed into rivers, with increased sediment loads resulting in depleted river biodiversity and fish populations. Reindeer are further impacted by reduced quantities of tree lichen, which serves as essential sustenance – particularly in winter, when snow makes ground lichen inaccessible as a food source. Speaking on the forest, Feodoroff laments a stark clash in attitudes and understandings: “For them [governments and companies] it’s a commodity, but for us it’s the core of our culture,” she says.

Duodji: the philosophy from which creativity emerges

This clash manifests itself also in vastly different conceptions of artistic practice – exemplified not least by the fact that the Northern Sámi word for “art” (“dáidda”) was only invented in the 1970s. This addition to the lexicon aimed to allow Sámi aesthetics to be recognised and not dismissed as “craft”, as the integral Sámi concept of “duodji” is frequently mistranslated in the western arts field.

Both a descriptor for creative activity and a meta-category whose scope is far wider than a western conception of art, duodji is “the knowledge space and the lead epistemology” of the Sámi community, says García-Antón.

This knowledge space encompasses spiritual thinking, communication with lands and waters, ethics and concepts of both beauty and utility, passed from generation to generation and converging in the making of objects. As the land is indivisible from the people, so creativity and beauty are indivisible from life’s other elements in the holistic Sámi worldview. “You only make and bring to the world objects that are needed, and there is no such division between ‘spiritual’ and ‘material’ things, but the two are intertwined,” explains Feodoroff. A key element of the philosophy is the making use of everything in your world – including the skulls and carcasses of reindeer, as Sara’s most famous works illustrate. “One of the things that [the Sámi Pavilion] is trying to do is to bring back duodji, to re-elevate it as the Sami philosophical perspective,” says García-Antón.

Introducing the artists of the Sámi Pavilion

Based in Guovdageaidnu (Kautokeino), on the Norwegian side of Sápmi, Máret Ánne Sara (b.1983) belongs to a family of reindeer herders. Her work explores the struggle to maintain Sámi worldviews and a traditional way of life within colonial structures, centering on the trauma experienced by reindeer herders.

Her most famous work, Pile o’Sápmi, was presented at the documenta 14 art exhibition in 2017. This monumental sculpture of reindeer skulls – described by Sara as “200 bloodied reindeer heads as a call to the world for help” – forms part of Sara’s ongoing art project and protest movement of the same name.

A protest of the Norwegian government’s forced slaughter of reindeer and a broader challenge to policies that actively harm Sámi livelihoods, Pile o’Sápmi is also deeply personal; with iterations of the work including a curtain of reindeer skulls hung in front of the Oslo Parliament, Pile o’Sápmi draws attention to the struggle of the artist’s younger brother, who embarked on a court battle to maintain his livelihood following orders to cull his herd so drastically that he faced bankruptcy. With her brother eventually losing his case following multiple appeals by the Norwegian government, Sara conceives her work “as a public trial, a trial of a society that has failed”.

Sara’s work for Venice represents a new stage in her art practice: “If my work at documenta was addressing and making visible this maelstrom of Nordic colonialism, then Venice is the aftermath,” she says. Though keeping the details under wraps, she hints that her focus is on making works that help to heal the traumas inflicted by colonial structures, and to bring Sámi knowledge and spiritual values to the fore. In particular, her thinking centres on non-verbal communication with the world around us via the stomach, as a preliminary point where environmental stimuli and emotions are processed.

“When I was six years old I decided that I was going to be an artist and a reindeer herder. The artist idea worked out better,” Anders Sunna (b.1985) laughs, standing in his studio in Jåhkåmåhke (Jokkmokk) on the Swedish side of Sápmi.

He now calls himself a “guerilla reindeer herder”, with his family’s rights to the use of their ancestral land and reindeer herding mark outlawed by the Swedish state. Sunna’s politically charged art – paintings, murals, sound installations and poetry – attests to his family’s struggle to defend their forest reindeer-herding practices.

His project for Venice will speak to the 50-year legal battle with the Swedish authorities via large-scale painting, encased in cabinets containing a library of court documentation. While acknowledging the past and present struggle, Sunna’s work serves as a conduit of healing and empowerment for future generations. “This whole project is family made,” Sunna explains, “Not only are my brothers coming with me to Venice, but my little boy helped me with photocopying the legal papers, and both children are helping me to pack.”

Pauliina Feodoroff (b.1977) is a Skolt Sámi artist, theatre director, filmmaker and land guardian (conservationist, informed by Sámi perspectives). Her family are reindeer herders, originally from the Kola peninsula in the Russian part of Sápmi but forced to relocate following the redrawing of the Russian border in 1944. Having served as President of the pan-Nordic Sámi Council and co-drafted the mandate for the Truth and Reconciliation Commission in Finland in 2019, Feodoroff now focuses on industrial deforestation and its impact on Sámi lands and waters, together with the culpability of government policy and consumerism in dismantling the collective models of existence and environmental care that underpin Sámi society.

Her practice, which includes practical forest and river restoration programmes in collaboration with NGO Snowchange, seeks to liberate Sámi bodies and minds from oppressive ways of being and thinking imposed by colonial structures. Bringing together land guardianship, indigenous ways of being in the land, performance and theatre, Feodoroff’s work for Venice is “a starting point for the wider project”, she says.

Rather than focusing purely on the damage done, it will look forward: “I have spent my life documenting all the losses [...] now it’s vital to focus on what we still have and how to make it stronger”. The second section of her three-part performance Matriarchy (entitled “The Auction”) refers to a broader presentation at the Sámi Pavilion, which will see landscapes symbolically “auctioned”.

Video screens will present films of the landscapes, with visitors able to bid and enter into a reciprocal contract with Feodoroff; the buyer purchases the video portrait and the right to visit the landscapes on a pre-arranged basis, while the proceeds will enable Feodoroff, in collaboration with Snowchange, to buy back the land into Sámi protection and vow to preserve and restore it.

“Our message is this,” says Feodoroff, “Please do not buy our lands. Buy our art instead.”