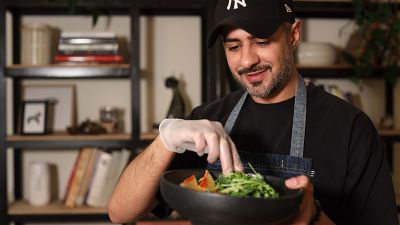 Social media influencer Khaled Alrayes is known as chef Khaled Choice online and around Doha. He remembers his passion for cooking started at an early age. He would go into his mother's kitchen and experiment with different cooking ingredients. He didn't know it at the time, but this was the start of his unique recipe creation, Khaled's choice.

"It was a dream ever since I was a kid to have a cafe, a Central Perk cafe because I'm in love with friends," says Khaled, referring to the popular US sitcom where six twenty-somethings meet in a cosy cafe in downtown New York.

Khaled majored in Business Administration and Entrepreneurship. Studying abroad in Liverpool, England, was a perfect fit for his entrepreneurial spirit. As soon as he returned home to Qatar, he realised he wasn't the only one. "It was the new scene in Doha. I think they started in 2012 and I wanted to be involved within this industry," Khaled says.

Starting a business was not easy. The home bakery was no exception and Khaled couldn't even bake. "I still remember my first few customers. They actually called me, to call me names, saying, ‘You're not allowed to do this, you're not allowed to sell us this kind of cake.’”

Back to the drawing board

Undeterred, Khaled went back to the drawing board. He researched, experimented and pushed the boundaries of conventional baking until he came up with a cake recipe everyone would enjoy. The fusion of flavours was a hit. Whenever he created a new cake, he noticed it was replicated in other bakeries in Doha.

"After one or two weeks, it spread all over Doha and in most of the cafes or most of the cake shops," says Khalid, who took it as a compliment. "They will actually do a similar kind of flavour, so I think that I was one of the most popular bakeshops in Doha at that point."

After two years of operating a home bakery business, the entrepreneur wanted more. "I decided that I'm done with being a home-based business. I need to be represented somewhere where people can experience the full experience," says Khaled.

Startup entrepreneurs are always looking for new ideas for their next big project. Their research revealed a gap in the Qatari food and beverage market.

"This is how we came up with Go Home," says Khaled. Go Home is a street food-style eatery in downtown Msheireb, in the heart of Doha. Hungry customers come to expect quality, ready-made meals freshly prepared on the day by chef Khaled and his team. The concept was simple yet unique—a first for Qatar.

It was a natural progression for Khaled to combine his social media influence and share his ideas. His social media account is naturally called ‘Khaled's Choice’. The name reflects his unique cooking style and harps back to travel adventures, which took him to vibrant countries like Bali, Turkey, and all over the Middle East.

Khaled enjoyed learning all about the different food cultures. It was this passion to learn that led him to create Khaled Choice. To inform his followers of his secret ingredients and develop recipes online, like his homemade pesto sauce for beginners. "I started Khaled's choice back in 2016. I think the aim was to start my own concept. To be my own support," he explains.

Khaled is ambitious and loves engagement across his social media platforms. He regularly posts photos and discusses recipes with his 27 thousand Instagram followers. "Having an online presence helped me a lot. To reach more clients, explain more and talk about new ideas that I have and that we have. It's okay to be proud of your passion. Of course, you have to follow it. You always have to talk about it and be proud," says Khaled.