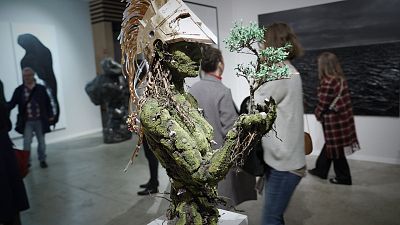 Just like last year, the French capital’s Grand Palais Éphémère is once again playing host to Art Paris, one of the highlights of the modern and contemporary art calendar. Located just a stone's throw from the Eiffel Tower, this major art fair is not only a showcase for French and Parisian galleries but also those from Europe and further afield.

Galleries present their leading artists and those who they have pinned their greatest hope on. Everything at the fair is up for sale and there’s a great diversity of choice - for all budgets.

"The fair has a number of high profile galleries, at the same time there are what I like to call author galleries, small and medium-sized galleries that have an original line. That’s essentially the DNA of Art Paris. Both the very well-known and discovery,” Art Paris' General Curator Guillaume Piens told Euronews.

130 galleries are taking part in this 2022 edition of Art Paris, which brings together galleries, artists, collectors, and art lovers. They are here to take the pulse of the market and discover the trends in contemporary creation. It includes both recognised and confirmed artists, as well as up-and-coming and emerging talents.

Art and the environment

The environment and ecology is the noticeable theme this year. Among all the artists exhibited, many deal with their relationship to nature, using organic materials in their work or questioning their carbon footprint. Universal and transversal themes that embrace very current issues according to Alice Audouin, curator of the exhibition "Art and Environment".

"It's a selection of 17 artists, many young artists. There is a real generational phenomenon today, it is true that many young artists address these environmental themes. They were born with the ecological crisis, for them, it's their time, so all those who address reality, who are sensitive and who work on the issues of their time, inevitably cross today's ecological issues, whether it's the climate, biodiversity, pollution."

Cameroonian painter Barthélemy Togo is among several artists in the fair’s 'Natural History' exhibit. His latest work produced during the pandemic features a series of prints of animals wearing face masks.

"I was born in Mbalmayo, which is in the middle of the Equatorial forest, and I know the importance of nature, the vitality of nature. I have always been in love and close to nature and it is important for me to include it in my artwork, and to celebrate it," Togo said.

In addition to the artists, many galleries have also embraced collections with ecology at their heart. Among them, Galleria Continua. It has a network of eight galleries across Europe, including its latest, recently inaugurated in Paris.

"We are opening this week an exhibition of Pascale Marthine Tayou, which we’ve brought here to Art Paris. We have brought three of her works because they really express the theme that the fair has chosen this year, that of art and the environment," said Galleria Continua's Salomé Zelic.

Art Paris aims to capture the state of modern and contemporary art today all under one roof.

The fair runs until Sunday, April 10.