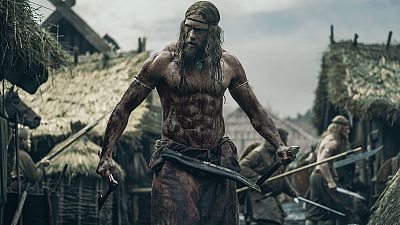 The Vikings carry a heavy iconography burden. Just saying the name and your mind immediately brings up images of horned helmets and longboats, chants and violent feasts.

Enduring and mysterious, the Vikings always seem both familiar to Europeans, yet distant. An unmistakable part of European history, but unlike the Romans or the Greeks, not one we consider as often when discussing European culture.

Now with Robert Eggers’ “The Northman”, a dramatic retelling of the Viking story that inspired Hamlet, about to be released, we take a look back at why the Vikings have never seemed to have the midas touch in cinemas.

A quasi-blockbuster, The Northman is a gritty take on an enduring Viking myth. Following Amleth (the Nordic Hamlet), Eggers’ tale has the $90 million budget of a Gladiator rival. But don’t be fooled by the money, Eggers, who made his name with the claustrophobic historic thrillers “The Lighthouse” and “The Witch” is more interested in recreating the era authentically than mainstream schlock.

Starring Alexander Skarsgård, Anya Taylor-Joy, Ethan Hawke, Nicole Kidman, Björk, Claes Bang and Willem Defoe; the studio is clearly putting a lot of heft behind the hope that audiences are interested in seeing the Vikings on film. Whether audiences will pile into cinemas, though, is yet to be seen.

Speaking to the New Yorker, Eggers said of the film: “We had kind of an expensive, arty - but commercial - but arty, but commercial, like, Viking movie… Now everyone is kind of, like, ‘If this isn’t Gladiator or Braveheart, we’re fucked.’ And the thing is, it isn’t. It has aspects of that, for sure. But my best intention of doing Gladiator or Braveheart is still… weirder.”

From the Pixar-rivalling DreamWorks Animations came “How to Train Your Dragon”. A massive commercial success for the studio, only eclipsed by Shrek. The first in the series of three films is still the fifth-highest-grossing animated film of all time.

It’s not hard to see why. The combination of a cute dragon, kind-hearted story, and excellent animation, critics and audiences alike raved. Animated films also have always been able to traverse through historical and geographical areas with relative ease.

A good but lesser known one: Valhalla Rising (2009)

Taking place a thousand years ago, Valhalla Rising follows a Norse warrior as he travels through the harsh landscape of Scandinavian Scotland. The film is brutal, and sparse with none of the characters even having formal names. Critics enjoyed it, but it barely made a dent on audiences, unlike Winding Refn’s next film, the massively successful and contemporary-set “Drive”.

The 90s was a good time for massive action blockbusters. In the same year Star Wars returned with “The Phantom Menace” and the Wachowski sisters wowed audiences with “The Matrix”. Sci-fi was returning reliable megahits. A convoluted film plagued by reshoots attempting to retell the Beowulf myth, less so.

“The 13th Warrior” will go down in history as one of the biggest box-office bombs of all time. Reportedly costing as much as $160 million to make, it barely scraped past $60 million in returns.

What went wrong? Starring Antonio Banderas as an Arab warrior traipsing across Russian landscapes with a character called Buliwyf, audiences found they couldn’t make heads or tails of the plot. Originally based on a Michael Crichton book, the writer was brought in to do reshoots in an attempt to get the film working.

From the set, actor Omar Sharif took issue as well.

“After my small role in The 13th Warrior, I said to myself, 'Let us stop this nonsense, these meal tickets that we do because it pays well.' I thought, 'Unless I find a stupendous film that I love and that makes me want to leave home to do, I will stop.' Bad pictures are very humiliating, I was really sick. It is terrifying to have to do the dialogue from bad scripts, to face a director who does not know what he is doing, in a film so bad that it is not even worth exploring.”

So is Eggers’ The Northman doomed for failure? Hopefully not, if at least because of the serious care the director has put into the project. The Vikings aren’t necessarily cinematic-kryptonite, and TV show “The Vikings” running for six seasons has shown audiences are open to the genre.