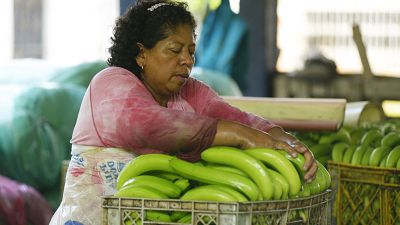 But from one week to the next, the groves have fallen silent - trade victims to a conflict half a world away.

Ecuador is the world's largest banana exporter, but the sector has been hammered by the war in Ukraine.

Now, with nowhere to send them, containers of the rotting fruit are piling up not far from where they were originally harvested.

"One in every five bananas produced in Ecuador goes to Ukraine and Russia," said Franklin Torres, president of Ecuador's FENABE banana producers federation.

"This war really affected us in that sense."

The vast majority of that portion goes to Russia, where banana sales are worth $698 million a year to Ecuador, which usually sends almost two million boxes of bananas a week to the eastern European neighbors.

But due to international transport sanctions over its invasion of Ukraine, Russia is not receiving its cargos of bananas.

The conflict has put the brakes on production in El Triunfo, close to Guayaquil, the site of Ecuador's main port.

"The banana producers are finished, I have not processed a single box for three weeks," said Mireya Carrera, 62, the owner of the Thalia banana plantation.

"The staff are leaving on their own without being fired because I cannot pay them."

She used to fill three containers with 3,000 20-kilogram (43-pound) boxes of bananas from her 28 hectare plantation.

The industry had already been hit by falling prices.

"Truly it's an insult to any type of business. What we're receiving is shameful and it's not even worth picking them."

He said the industry has lost "more than $10 million in three weeks."

"Every year we have the problem of low prices, but now it has become impossible to get a contract for bananas. I prefer to give them away," said Carrera.

According to Jose Antonio Hidalgo, director of the AEBE association of banana exporters, within a week of the war starting, the bananas destined for Russia and Ukraine needed a new market, "causing a price crisis."

Around a million boxes have remained unsold in the last month.

Faced with the prospect of a surplus sending the domestic price plummeting, the banana business union decided to donate them to local food programs.

The war has already cost around 6,000 permanent employees their jobs, according to ACORBANEC.

The difficulties have also impacted he El Porvenir plantation in neighboring Puerto Inca, which neighbors Guayaquil.

Having sold a container with more than 1,000 boxes "what we received is to pay salaries," said the plantation's administrator Lourdes Cedeno.

El Porvenir already had to halve salaries in March as it was.

Banana producers, who protested in Guayaquil last week, want the government to help them out by buying their fruit for its food programs.

President Guillermo Lasso said that "is not realistic. We need to place them in other markets in the world."

But for Salazar, "Putting them in other markets is utopian. There's no other market in the world that can buy as much as Russia," he said.

Check out the video above to hear from Ecuadorian banana traders

Meet the man bringing the Uffizi museum into the future