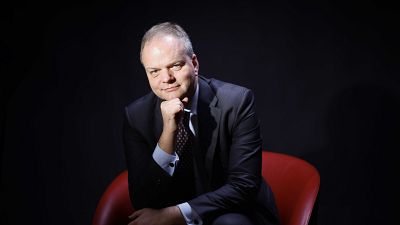 Eike Schmidt, poses for portraits before holding a press conference at the Foreign Press Club in Rome.   -   Copyright  Domenico Stinellis/Copyright 2018 The Associated Press. All rights reserved.   -
By Jonny Walfisz  •  Updated: 06/04/2022

When I speak to Eike Schmidt, he is sitting under an imposing painting of four of the Uffizi’s past curators.

Painted around World War I by Mario Cini, the focal point in the image is Carlo Gamba, Cini’s nephew. Schmidt explains that Gamba was by no means the most important of the four curators in terms of history, but it helps when your uncle is the painter.

Unlike Gamba’s position in the painting, Schmidt did not gain his place as the director of the Uffizi Gallery in Florence through nepotism.

With a PhD in Art History, previous experience curating the Medici collection, and spells as a curator at the National Gallery of Art in Washington DC and then the J. Paul Getty Museum in Los Angeles, few people were more qualified to take up the post in 2015.

Since he became director, the Uffizi has flourished. This week, it was named the most visited cultural site in all of Italy, surpassing open air archaeological sites like the Colosseum, Pompei and even the Vatican Museums. Although Schmidt is quick to point out, the Vatican isn’t actually in Italy.

Schmidt has routinely made the headlines as he took a gallery with one of the largest troves of renaissance art, and blew apart its reputation -- in a good way.

Under his tenure, the Uffizi has launched a TikTok channel, a cooking show, a short video collection and even brought contemporary street art into the gallery.

“It needs to be interesting and relevant to people today,” Schmidt says, expounding his philosophy of curation. “Often, we just need to have an innocent look at the art and ask how to connect with people from 500 years ago.”

Much of the work that Schmidt has done to revitalise the gallery comes in simple reorganisation. Painting order has been changed and the labels have been adapted to better educate the people visiting.

“Many art historians worry that we’re dumbing them down. But if we did that, we’re not doing our jobs right,” he says.

“We have to simplify without losing the important information,” Schmidt argues that this could mean losing a detail about two critiques disagreeing over the state of a certain antiquity, but what the descriptions cannot lose is “why this work of art matters to me, the individual”.

Another crucial turnaround has been how the galleries are used.

“Last year we opened up 14 new galleries dedicated to 16th century painting from the high and late renaissance.”

He managed to do this by converting storage spaces that were disused into more galleries, giving visitors more bang for their buck.

He has also brought bold exhibitions to the museum, including one that focused on the violence women suffered by men through history.

"That had almost 200,000 visitors because we installed it between two of our most visited galleries, the Da Vinci and the Michelangelo and Rafael galleries. It meant more people were able to see it, which makes me proud."

Everything is visitor focused in Schmidt’s eyes. Long associated with endless queues and a lack of seating, he oversaw the building of a new cafeteria on the Uffizi Loggia, which has a skyline view of Florence.

He’s also added 600 seating spaces for people to take a moment to appreciate the art.

“Some people argued visitors would just be checking their phones, but people sit down and appreciate the works of art, they make drawings and they contemplate,” he says.

The visitor-first approach is also what prompted Schmidt to endorse inviting influencers like Martina Socrate and Chiara Ferragni into the galleries to create viral buzz around the century-old artworks. It’s why Ilde Forgione, who runs the museum’s TikTok account, was allowed to poke fun at the art by making memes out of classics. It’s the use of computer systems to regulate visitor flow so there are never more than 900 people in at once but so that the queues still move quickly.

And all of it has worked.

More people than ever visit the museum and the largest growth has been seen from under 25s. Over a third of all visitors in 2020 were under 25, and that’s despite school trips ceasing altogether that year.

As to whether it was difficult to persuade the rest of the museum’s management to his way of thinking, Schmidt speaks plainly.

“It took some fighting.”

“Actually, more convincing than fighting,” he corrects. “It was about creating examples. After the influencers a lot of other people came in dressed up to take photos of themselves in front of the artwork. That’s wonderful. They come in as fashionistas but then they look at the art and want to know more. They leave with a cultural experience.”

One of the biggest changes Schmidt has made has been internal. When he looked at who was already hired at the Uffizi, he saw multiple people with PhDs in subjects like literature, philosophy and sociology that were wasted as security guards. Instead of hiring new people, he took those underutilised and created new departments for intercultural communications, digital strategies and marketing.

“A lot was possible once people were given those responsibilities. It gave everyone a much high motivation.”

Schmidt is quick to diminish his role in creating the new idea of the Uffizi. “It’s not just an outsider coming in and shaking things up, it’s been a team effort to build these results.”

But that’s just exemplary of a director who’s committed on taking a historic gallery like the Uffizi and broadening its appeal to everybody.

“In the past, there would have been a typical ideal visitor,” he says. “Now we have a broad opening and a diversity of visitors. There isn't one standardised Uffizi visitor.”

How has the Russia-Ukraine war devastated Ecuador's banana industry?

French winemakers light candles to save their grapes from frost