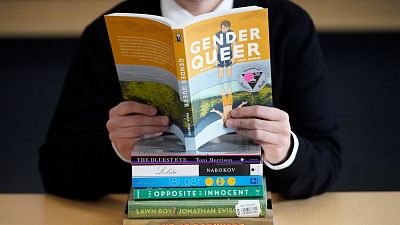 Book bannings and threats against librarians have shot up in the US, according to the State of America's Libraries Report by the American Library Association’s (ALA) Office for Intellectual Freedom.

There has been almost double the number of challenges to books, reported across the country in 2021 compared with 2020.

The association found 729 challenges against nearly 1,600 books at public schools and libraries in the past year. It’s the highest amount the ALA has seen in 20 years of assessments.

A “challenge” to a book is a “formal, written complaint filed with a library or school requesting that materials be removed because of content or appropriateness,” according to the ALA.

In November, last year, reports emerged of parents storming into Spotsylvania county town hall in Virginia to attempt to remove all “objectionable” books from schools.

Novels with themes on race and sexuality were those singled out by parents to be removed from high school libraries.

In the same month, Texas state representative Matt Krause demanded the removal of 850 books from the school curriculum.

In March this year, Florida Governor Ron DeSantis criticised the two books as he signed a law to force elementary schools to provide a searchable list of every book in their libraries for parents to vet.

Both Kobabe and Evison’s books weren’t necessarily aimed at teens and younger, but gained traction after the ALA gave the works an Alex Award that signifies a book “written for adults that have special appeal to young adults, ages 12 through 18.”

“I think a big part of our books getting so much attention is that they're award winners and ended up being purchased by libraries all over the country,” Kobabe said.

The list of books most targeted in the past year almost exclusively have either LGBT or race themes.

Regular books to receive complaints include Angie Thomas' bestselling “The Hate U Give,” written in reaction to the police shooting of Oscar Grant; George Johnson's; “All Boys Aren't Blue,” which contains a selection of essays about growing up as a queer black man; Juno Dawson's “This Book Is Gay”, a non-fiction look at LGBT issues; and Susan Kuklin's “Beyond Magenta,” a collection of interviews with transgender and gender-neutral teens.

“A year ago, we might have been receiving one, maybe two reports a day about a book being challenged at a library. And usually those calls would be for guidance on how to handle a challenge or for materials that support the value of the work being challenged,” Deborah Caldwell-Stone, director of ALA told the AP.

“Now, we're getting three, four, five reports a day, many in need of support and some in need of a great deal of support,” she said. “We’re on the phone constantly.”