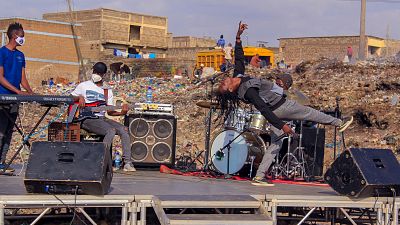 As a young man growing up in the slums of Dandora, Kenya, Julius Owino had an interest in poetry and music. Being a young person trying to figure out who he was and what he stood for. He had two options, follow a life of crime or level up and become a better person. He chose the latter.

His rapping style caught the attention of the Mau Mau Camp, who are considered the royalty of Kenyan Hip-hop. They started to make music together, which propelled him into stardom, meeting the Wu-Tang Clan and DMX, two hip-hop heavyweights.

Owino feels strongly about empowering and uniting young people. He raps in Sheng – a Kenyan language, mixing in English and Swahili because in a country divided by tribes and class lines, Owino says that's one of the things that unifies people, particularly young Kenyans.

"Kutabadilishwa na nani Kama si sisi" is the name of one of the songs on Owino's first album, which translates in English as "Who will change things if it's not us?"

Hip-hop may have saved Juliani's life, but his real work is building confidence and helping others. He's an urban social entrepreneur that's genuinely created change in his community.

"We're putting our hands into an entrepreneurship and a development angle to try to use creativity to solve our problems," explains Juilliani.

Dandora is an eastern suburb of Nairobi. The World Bank project was established in the late 1970s to provide affordable housing to local residents. The program never materialised due to management issues, leaving the area to turn into a densely populated slum and the largest dumpsite in Kenya. The community in Dandora is growing and many new opportunities for entrepreneurs are opening up. For Juliani, it is a land of opportunity.

Locals can receive all kinds of assistance from the collective. "Whatever you feel like doing, you can do here. If we don't have what you need to help, we can figure out a partnership and friends to help us do it," says Juliani.

Dandora Hip-Hop City (DHC) is a bright, creative space in the Dandora slums in Nairobi with a sense of belonging to anyone who wants to be involved, grow, and network. They aim to provide a safe space for youths away from the dumpsite by providing opportunities in an area where options are few and far between.

A safe place to be

Many young children are lured into the dumpsite out of desperation to survive. It's also a place where criminal gangs can potentially exploit them. One such youngster is John Kinyanjui, who, as a child, was scavenging in one of the many landfill sites in Dandora.

John was an aspiring rapper but didn't have any resources to nurture his talent. Juliani met John at the dumpsite and asked him to rap for him. "I was a bit too little, but I used to do lyrics and all that", he explains to Scenes. "So I did lyrics to him (Juliani) and he promised that one day he's planning to start an organisation that will work with artists and youth in the community," says John.

The DHC organisation helped John get out of the dumpsite and into music. He is now a member of DHC and goes by the stage name Dash Johteez.

The DHC centre comprises a fully equipped studio with professional producers on hand to help develop members' music and careers.

"The existence of DHC itself has made it possible to see that someone can get from the dumpsite to be a CEO," explains music producer James Andare. The DHC creates a conducive environment with tools and resources to enhance ideas, dreams and aspirations.

Juliani's social program comes in two parts. The music element is DHC, but the second is an income generation scheme named 'Taka Bank'. The word 'taka' derives from the Swahili translation of rubbish. Juliani remembers seeing 'taka' everywhere in his community. He would often wonder why no one is doing anything with this branded trash. So he decided to take action. He took it upon himself to contact the brand manufacturers and told them it was a problem.

"I don't consider any form of imagination as craziness or whatever—anything in my mind I consider valuable. So is the ability to remove it, bring it to life, is what the Taka Bank and the Hip-Hop city and everything that I try to do," Juliani explains.

They responded and worked with Juliani to get 'clean' trash instead of trash from a landfill site. This clean trash is direct from the user in a household and is more valuable to recyclers.

Funding was scarce, but Juliani set up a local kiosk that helped the local community and made sure social support was available. They amassed thousands of followers who exchanged rubbish for store cupboard products through the Taka Bank app. So a few plastic bottles would fetch a bag of rice.

"The community can come, deposit the trash and at the same time, the trash converts into points that they can use to buy things on our website," explains Juliani.

Juliani has big plans for the Taka Bank and wants to see more people using the sites and make it easier to convert the trash into household products.

"The ability to move from a thought to a word or sentence and practical action. Not many people do that," he says. Juliani has created a conducive environment with tools and resources that will enhance ideas, dreams and aspirations for the people of Dandora.

Meet the Qatari farmer growing medicinal plants in the desert