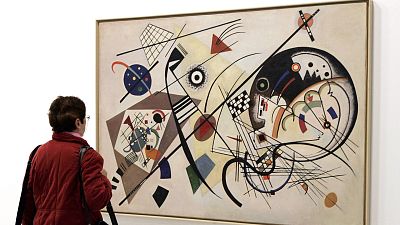 A visitor views a painting by Russian artist Kandinsky which is part of the exhibition presented at the Pompidou Center in Paris   -   Copyright  AP Photo   -
By Jonny Walfisz  •  Updated: 30/03/2022

An art gallery in Seoul, South Korea is refusing to return works of art to Russia.

The Sejong Center For Performance Arts in Seoul is not returning 75 works it has loaned from four different Russian museums.

The 75 artworks from 49 major Russian and Soviet artists include the likes of Wassily Kandinsky, Kazimir Malevich, Alexander Rodchenko and Natalia Goncharova.

The majority of the works were on loan from the Yekaterinburg Museum of Fine Arts, with other pieces also given by the Nizhny Novgorod State Art Museum, the Krasnoyarsk Surikov Art Museum and the Far Eastern Art Museum.

The pieces were on loan for the exhibition “Kandinsky, Malevich and the Russian Avant-Garde” that was due to run until April 17. But an official for the Yekaterinburg Museum requested the early closure of the exhibition by April 3 due to the “difficult political situation”, reports The Korea Times.

A response to South Korea's sanctions

The request is in response to the continuing global tension over the Russian invasion of Ukraine. South Korea has joined many other countries in condemning Russia’s war on Ukraine and has approved sanctions against the Russian state.

South Korea was included among the US and the EU in banning transactions with Russia’s central bank, although it also has an exemption for some tech-related exports to Russia.

Now the Seoul-based museum has refused to comply with the country’s request to hand back the artworks early. The exhibition, co-run by the Korea Times and Hankook Ilbo will continue for its originally planned duration, claims Hankook Ilbo. “We will adhere to the contract and run the exhibition until the promised date.”

Demands for returns in other countries

Similar requests have been sent to other countries currently holding prized artworks that originate in Russia.

Russia’s Ministry of Culture demanded the Gallerie d’Italia in Milan return 23 artworks to the Russian Hermitage Museum. The Palazzo Reale Museum in Milan was also requested to return two paintings including ‘Young woman with a feathered hat’ by Titian.

Museum director Domenico Piraina did not believe they could oppose the request. “I think the two works will be picked up by the end of March.”

While Russia is demanding the return of some of its artworks, there has also been widespread condemnation of its war through artists cancelling shows in an effort to culturally sanction the country.

Icelandic artist Ragnar Kjartansson pulled his exhibition from Moscow’s GES-2 Museum in a stand for Ukraine.

From within the country, the Garage Museum of Contemporary Art in Moscow announced it had postponed all of its exhibitions until the end of the Ukraine invasion. “We cannot support the illusion of normality when such events are taking place,” the museum wrote in a statement.