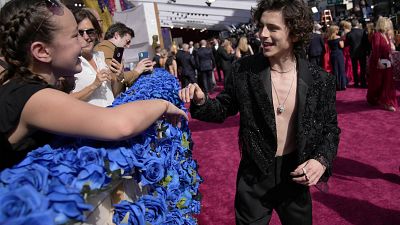 If you’ve been to the cinema or streamed a film in the last five years you’ll know how hard it is to avoid seeing Timothée Chalamet, but last night we saw a little more of him than expected.

Chalamet, who starred in the six-Oscar winning sci-fi film ‘Dune’, took to the Oscars red carpet on 27 March sporting a sequinned Louis Vuitton suit, beneath which he was bare-chested.

The internet has predictably gone wild for the look, either praising the choice or simply lusting after the ‘Don’t Look Up’ star.

The ubiquitous actor has maintained an air of queer mystique ever since his breakthrough role in ‘Call Me by Your Name,’ and his fashion-forward looks have set tongues wagging on more than one occasion.

In 2019 Chalamet sported an all-black ensemble designed by Virgil Abloh for Louis Vuitton, topped off with a sparkling bib to the Gloden Globes. Although many mistakenly believed it was a harness at the time the look still caught the imagination of the drooling, sorry we mean viewing, public.

Elsewhere, Chalamet wore a pair of haute couture white sweatpants to the 2021 Met Gala, accompanied by a white satin jacket, and his penchant for garish pink suits (such as the one he wore to the Venice Film Festival in the same year) is well known.

Chalamet’s look was part of a wider trend for gender-neutral fashion at the 94th Academy Awards, which saw Kristen Stewart, Kodi Smit-McPhee, and Wesley Snipes all sporting gender-bending outfits to different degrees.

Chalamet’s clothes horse status may often see him in the headlines but he’s no Harry Styles in that his fashion is generally a twist on the classic tux.

But is the world’s premiere straight twink the first to perfect this as a brand? The tuxedo has long been a site to contest gender norms and make a statement, let’s take a dive into some celebs who’ve reinvented the suit to turn a wardrobe staple into a fashion moment on the Oscars red carpet.

Where else to begin but with Celine Dion who famously styled a white tuxedo by wearing it…backwards?

This outfit is now so canon now that it seems (almost) normal, but at the time it was a ballsy move to go not only menswear but also kooky, in an era where long trains and vast amounts of tulle were common on the red carpet.

Dion wore this iconic look (designed by John Galiano for Dior) to the 1999 Oscars when she was nominated for Best Song Written for a Motion Picture for ‘My Heart Will Go On’. Dion’s Titanic-theme crooner may be out of the charts but her look that night has certainly gone on in the minds of fashion documentarians everywhere.

Keaton goes down in history as an unlikely fashion icon, with the androgynous Annie Hall look coming to define her public persona to such an extent it seeped into her other on-screen roles.

On Oscars night half a decade after Dion, Keaton wore a Ralph Lauren suit styled with a bowler hat on the night she was nominated for Best Actress in ‘Something’s Gotta Give’.

Keaton fans lapped up her menswear aesthetic, which fed into her style mythology for a generation.

Remember when Timothee Chalamet kind of wore a harness? Well, leave it to an actual queer person to do the real thing.

Olympic figure skater and ‘Dancing with the Stars’ winner Adam Rippon graced the red carpet of the 90th Academy Awards wearing a deconstructed suit with a leather harness underneath.

Rippon, who is openly gay, wore the garment designed by Jeremy Scott for Moschino to the ceremony, raising the bar for what sexy menswear can look like and driving everyone wild in the process.

Our final pick for reinventing the tux on the red carpet has to go to legend of screen and stage, Billy Porter.

The star of ‘Pose’ attended the 2019 Oscars wearing a tux-cum-ball gown which led to a hilarious viral moment with famous Oscar-losing actress Glenn Close.

True to form, Porter, famous for his eccentric fashions, wore the item with the grace of an iconic red carpet look whilst simultaneously being as nonchalant as if he were walking to the shop.

The velvet number was designed by Christian Siriano and Porter accessorised it with, of course, a gigantic diamond rock of a ring.