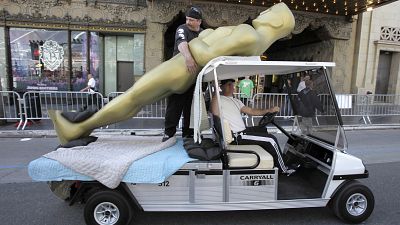 Sundays night's Academy Award ceremony in Los Angeles brings the cream of the Hollywood crop to the red carpet for the chance to be seen, photographed, and maybe even receive one of the coveted gold statuettes.

For the acting and directing nominees, even if they don't win an Oscar, they'll still walk away as winners of a goodie bag valued at more than €127,000.

Stars including Will Smith, Andrew Garfield, Nicole Kidman and Judi Dench will be lavished with gifts such as holidays at luxury resorts, the services of a 'self love' guru, personal trainer sessions, plastic surgery treatments and fancy cosmetics.

But the 20th Annual “Everyone Wins” Nominee Gift Bags are causing a stooshie -- that's the Scots word for uproar -- for one particular gift.

The Highland Titles company says it's giving away a plot of land in the Scottish Highlands, and the right to be styled Lord or Lady of Glencoe.

So will celebrities really be able to show up in Scotland and call themselves Lord Denzel Washington, or Lady Jessica Chastain, and visit a plot of land that's truly their own?

"First and foremost, you are not the owner of any land in Scotland despite what this company might have led you to believe," Andy Wightman, a former Green Member of the Scottish Parliament, writes in an open letter to nominees.

"You have also not been given any right to style yourself Lord or Lady of Glencoe. Highland Titles has no authority or power to bestow such a title on you."

"You have a piece of paper (several probably) with impressive sounding claims and illustrations. They remain just pieces of paper, however, and provide you with nothing more than that," he states bluntly.

Highland Titles told a Scottish newspaper this week that it's all "harmless fun" and they can't actually award anyone with a title like Lord or Lady, and claim they make it clear recipients only get beneficial rights of the land.

So what's the deal with the land ownership?

Companies pay up to €22,000 for the opportunity to have their gifts included in the celebrity goodie bags, so Highland Titles and other companies invest in this scenario in order to make a healthy profit out of the publicity and cachet that comes from being associated with the Oscars.

But the land they say you can buy from them? Experts are adamant that this part is simply not possible.

"The legislation that's been in place in Scotland since 1979 provides that you can't register it then you can't own it," explains Scott Wortley, a lecturer in commercial law at the University of Edinburgh Law School.

"The Land Registration Act expressly provides that if a plot is of no practical utility, and is so small, then it will not be able to be registered in the Land Register of Scotland," he tells Euronews.

Although Highland Titles does own a bigger piece of land in Scotland, it can't actually sell off these smaller plots -- or give them away to Hollywood celebrities -- because they would simply be too small to be included in the land register.

And as Scott Wortley notes: "if you can't register a plot of land, then ownership of it can’t be sold."

In fact, when earlier English legislation was first drawn up in 1971, lawmakers were specifically thinking about how to stamp out the practice of targeting North American tourists and selling them souvenir plots of land.

Why do celebrities get free stuff when they can afford it themselves?

Distinctive Assets are the niche LA marketing company behind the Oscar goodie bags. They answer this question very frankly.

"Ours is simply a marketing program for companies interested in connecting with celebrities" the company says in a statement.

"Companies give away product to high-profile individuals who can potentially help their brand. We are not gifting movie stars and music icons out of a sense of philanthropy. We are gifting them for the same reason they are paid upwards of $20 million for a single film . . . because their personal brand has value as a commodity."

In the case of a tiny plot of land in Scotland they'll never actually own, or a title they can't actually use, the value of that celebrity commodity may not be worth what Highland Titles paid to have their products included in Sunday's Oscar swag bag.

Tune into our LIVE Oscars blog for the ceremony from Midnight CET tonight!

Which champagne will your favourite stars be drinking at the Oscars?