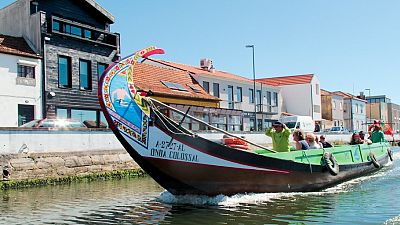 A volcanic island town, the 'third happiest city in Europe' and Portugal’s answer to Venice are among the top four contenders for European Capital of Culture 2027.

The final shortlist for Portugal was whittled down by a panel of 12 independent experts earlier this month. It’ll be Portugal’s forth time hosting in 2027, after Lisbon in 1994, Porto in 2001 and Guimarães in 2012. Latvia will also be hosting in the same year.

It’s not hard to see why the final four were chosen. Each boasts a by turns enchanting and imposing array of heritage sites, local curiosities, arts and architecture, with a distinctive look and feel and divergent approaches to the Capital of Culture brief. Years of work have already gone into preparing each bid, with the winner set to be chosen at the end of 2022

Sometimes dubbed the “Portuguese Venice”, Aveiro sits on the northern coast in the Central Region, on the Rio de Aveiro saltwater lagoon. It’s best known by outsiders for the moliceiros: slender boats painted in bright and cheerful colours, once used to clear algae from the water and now enjoying a second life conveying tourists up and down the banks.

The Art Nouveau style had its golden age in Portugal in the early twentieth century, and Aveiro was no exception. So ubiquitous is the form that the city boasts its own Art Nouveau Museum alongside the expansive Maritime Museum of Ilhavi. It's also home to the Vista Alegre porcelain factory, which has been crafting fine ceramics for more than 200 years, with a museum boasts more than 30,000 individual pieces.

Aveiro launched an enthusiastic bid for the 2027 crown, with the official website drawing on recent successes including a 2020 Music Tech Fest and a digital art exhibit. Its bidbook submitted to the EU-appointed panel included a short film in which local residents from fishermen to ballerinas talked about their memories of the city, and ambitions for the future.

Ponta Delgada hugs the rugged coastline of São Miguel in the Azores: an autonomous zone and string of nine volcanic islands in the mid-Atlantic. Today the region's bustling, outward-facing capital, Ponta Delgada began as a fishing village and gained its city status after an earthquake in 1522, going on to become a crucial way-station for ships headed from Portugal and the Mediterranean to the Americas and West Indies.

The team behind Ponta Delgada’s 2027 bid travelled 600km across the archipelago to meet locals and artists from the islands of Corvo through to Santa Maria. Their vision, they say, is to make the Capital of Culture a collaborative project that will boost cultural, social and economic development across the whole region.

The ancient city of Braga is widely regarded as the oldest in Portugal, and according to the pollsters at Eurobarometer, the third highest-rated in Europe by citizens for quality of life. Located in the northwest, its formal history goes back to 16AD, and for the best part of the last 2000 years it has been one of Portugal’s most important hubs for commerce, culture and religion.

The country's ecclesiastical capital boasts more than 30 churches as well as the imposing Braga Cathedral. It is known for its legendary Holy Week celebrations around Easter, with the building lit up by night and pilgrims flocking in their thousands to take part in mystical processions through the streets. Locals are also proud of the city’s Roman heritage, holding an annual six-day themed festival every May, and of the unique gastronomy.

Braga’s Capital of Culture campaign hinges on the assertion: “Two thousand years of history do not deter us from imagining the future.” It has an array of initiatives planned to transform the city’s cultural offering in the event of a successful bid from 2023 to 2027.

Evora, in the south-central Alentejo region, is a well-preserved medieval town designated a UNESCO world heritage site since 1986. Unsurprisingly it's one of Portugal’s top destinations for culture and heritage tourism. Among the draws are the ruins of a Roman temple, a 12th-century cathedral, and the skeleton-adorned Chapel of Bones, built in the 14th century by the Franciscans.

Away from ancient history, Evora is also a lively hub of Alentejo tradition, arts and handicrafts, as well as being the residence place of several noted contemporary Portuguese artists. Its 2027 bid draws on this rich and multi-faceted heritage, with local musicians creating a “soundscape of Evora” and graphic design workshops aimed at re-imagining the city’s visual identity.