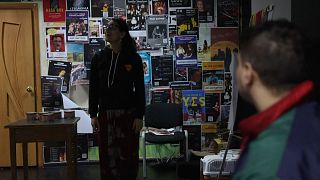 While thousands have fled Kyiv due to the Russian invasion, members of an independent theatre company have stayed and taken refuge underground   -   Copyright  EBU
By Theo Farrant  & EBU  •  Updated: 24/03/2022

Since the beginning of the Russian invasion of Ukraine, the streets of Kyiv have been deserted - and are now full of barricades, burnt-out cars, rubble and broken glass.

But there remains life in the depths of Kyiv, in shelters and underground bunkers, where people are protecting themselves from Russia's bombs.

This is what around 30 members of an independent theatre company named Pro-English have done: the only company to perform their plays in English in the city.

Since the war began, they decided to stay in the basement of the theatre, where actors and musicians eat, sleep and rehearse.

Anabel Soto, an actress and book publisher has used her packaged books to protect the windows of the shelter.

“For the first few days, we didn't all understand what was going on: really, we expected all this to last four days...not long,” explained Soto.

Anabel continues to rehearse her latest play under the watchful eye of the director, Alex Vorovensky.

Jenya, a music teacher who has been in the bunker for 25 days, with his wife and piano, continues to teach his students, now virtually, as many of them are already far away from Ukraine.

They all entered at the beginning of the invasion and do not yet know how long they will have to stay.

“How do we bear this kind of life? Because art is my life and if there is art, life goes on," says the director of the theatre, Alex Vorovensky.