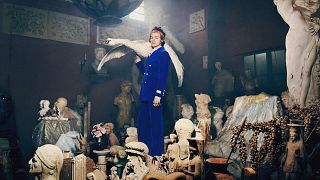 When it comes to fashion, womenswear usually gets the most attention.

For once, it's menswear that's under the spotlight at the Victoria and Albert Museum in London.

A new exhibition retraces the history of masculine fashion while confronting the visitors with changing gender norms.

A shift in the conversation

The show is split into three parts: Undressed, Overdressed and Redressed.

"Overdressed is like a fabulous dressing up box where we're covering looks from the 18th century and fabulous portraits with the looks from the 1960s and contemporary fashion to celebrate the moments in history where menswear has embraced colour and decoration," says Rosalind McKever, Co-curator of the exhibition "Fashioning Masculinities: The Art of Menswear" at the Victoria and Albert Museum (V&A).

Through the outfits, the exhibition explores gender norms and boundaries in fashion.

The exhibition covers all forms of menswear by including non-binary models and women, blurring the lines of what is perceived as feminine and masculine.

"We really wanted to think about the ways that contemporary womenswear has been influenced by historical menswear. So we have wonderful examples where contemporary designers -- we have a great look by Gianni Versace, which is a womenswear coat -- has drawn on historical menswear. In this case, a painting from our own collection from the early 17th century where we see a doublet (jacket) and very broad breeches being reinterpreted by Versace as a tightly fitted jacket and large skirt," says McKever.

One of the standouts of the exhibition is an outfit worn by actor, Billy Porter, at the 2019 Golden Globes.

"This is extraordinary because this wonderful look is mimicking what was happening in 18th-century menswear. If you look at the ornamentation, the florals, those are things that we see within the V&A's historical collections. And it was such an important moment of a man reclaiming that red carpet where we're used to focussing on the women's wear, focussing on the gowns as the men file past in their tuxedos. And Billy Porter was saying 'No, enough is enough.' He could reclaim that limelight with this extraordinary cape with its shocking pink lining that really stole the show," McKever, explains.

Other highlights of the show include an indigo Gucci ensemble from 2019 worn by singer Harry Styles and a Haider Ackerman sequinned ensemble worn by actor Timothée Chalamet to the premiere of Dune in 2021.

The final room, part of the 'Redressed' section, also features a dress by Ella Lynch and MistyCouture worn by drag performer Bimini Bon Boulash for the finale of season two of the British version of Ru Paul's Drag Race.

'Fashioning Masculinities: The Art of Menswear' runs from 19 March until 6 November 2022 at the Victoria and Albert Museum.

Learning about Notre Dame's fire through augmented reality 3 years on