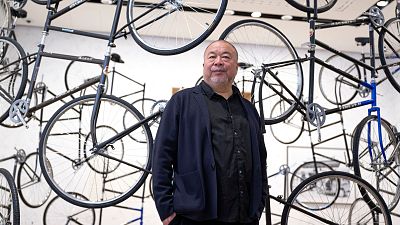 Activist and critic Ai Weiwei is one of the most important artists of our time.

And now the Albertina Modern gallery in Vienna is presenting his most comprehensive retrospective to date.

'In Search of Humanity' deals in depth with the aspects of humanity and artistic commentary in the work of Ai Weiwei.

The exhibition traces the evolution of his artistic practice and political activism over several decades.

Several works at the exhibition centre around the idea of fleeing war and persecution.

For example, Ai's piece Crystal Ball (2017), which features an arrangement of life jackets collected from the shores of the Greek island of Lesbos positioned around a giant crystal ball in a lotus-shaped installation.

The exhibition also features a life-sized replica of the prison cell where he was detained and interrogated after his arrest in 2011 by Chinese police.

On this same theme of deprivation of liberty, visitors can discover the treadmill used by his friend, Julian Assange, during his stay in the Ecuadorian Embassy in London.

Irreverence and humor are also present, as in the series of photos of Ai Weiwei's famous middle finger directed to sites such as the ceremonial gate of Tiananmen Square in Beijing.

These photographs are placed under a neon-lit four-letter insult reading 'FUCK'.

A crisis of democracy

At the unveiling of his exhibition, Ai Weiwei spoke about the current situation unfolding in Ukraine.

"The exhibition opening in such a time when Europe has more than 2 million refugees, and Russia invaded Ukraine and we are in the middle of unknowing, uncertainty and also could be a bigger crisis and the danger come to our life, so-called a peaceful life, since World War Two, 70-80 years (ago), suddenly we feel the foundation is shaking, foundation of democracy, of freedom is shaking," said the renowned Chinese artist.

'In Search of Humanity' runs until 4 September 2022 at the Albertina Modern gallery in Vienna.