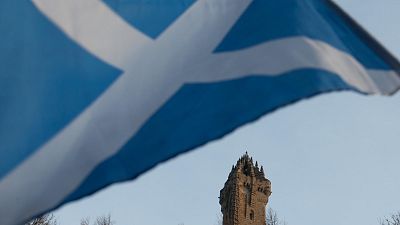 Scots might be the most widely spoken European language you've never heard of, with at least 1.5 million native speakers and recognised by the Council of Europe as an official minority language.

This month, households across Scotland are being asked to complete a census, and Scots language campaigners are urging fellow speakers to make their voices heard when filling the paperwork, which asks how much Scots people speak, read, write or understand.

"There are millions of passive speakers" says Alistair Heather, a writer, broadcaster and tireless advocate for the advancement of the Scots language.

"Scots needs to be normal. It needs to be used in all spheres, like you need to be able to do the boring stuff in your life in Scots for it to be a legitimate language, like filling tax forms."

At the moment the ability to navigate everyday officialdom in Scots is extremely limited, although there have been baby steps since the last census in 2011, including being able to apply for some grant funding, or having access to some political information in Scots.

Campaigners say with the data compiled in the new census they'll be able to press the government to provide more services in a language that many people use on a daily basis.

"Just about every Scots speaker is bilingual and government agencies are becoming more aware that Scots is a thing" says Heather, who is working with a cross-party group of politicians to advise them on a proposed Scots Language Act which could potentially codify and regularise the status of Scots.

There's no doubt that Scots has gone through something of a renaissance in recent years, and the language, perceived as the slang of the lower classes throughout the latter half of the 20th century, is becoming more mainstream again.

"There is a wider global narrative around minority languages, and minority identities re-emerging and being more respected" Alistair Heather tells Euronews.

"Non-dominant language varieties are increasingly being valued, in response perhaps to globalisation where we all speak one language, maybe English, but we all want to have our own private sphere as well. And the fracturing of dominant identities through social media is helping too" he says.

Historically, the Scots language flourished as part of the British Empire and even into the first decades of the 20th century Scotland was still a majority Scots-speaking country.

When the Empire collapsed, minority languages like Scots, Gaelic, Welsh and Ulster Scots in Ireland came under pressure as English became the one preferred language of the single-nation identity of the United Kingdom.

"That's when you see the most pressure put on Scots in official spheres, and cultural pressure being put on the non-dominant languages" Alistair Heather adds.

Now, as modern Britain diversifies from that proposition of a monolingual, monoethnic state, Scots has the space to thrive again - with more people reclaiming their language identity, embracing the language they spoke at home or in the playground, all the while hearing standard English on television, on the radio, or in the classroom.

Students learning Scots as part of their studies

At a school in north-east Scotland, teacher Jamie Fairbairn is encouraging his senior pupils to express themselves in Scots.

Students in this part of the country are likely to speak a dialect called Doric - which is largely mutually intelligible to other Scots speakers, but with many of its own very specific local words as well.

"When I started this course in 2014 we had seven kids, now we've got many more than that" says Fairbairn.

"I remember this quine [girl] coming up to me and saying 'well de ya ken I dinna spik Scots' [do you know that I don't speak Scots]. So she was speaking Scots to tell me that she didn't speak Scots."

Geography teacher Jamie Fairbairn says that students found it liberating to be told they spoke another language, and that they were probably bilingual if they're using English as well - switching languages from home, to friends to school all the time.

Another observation from the classroom is how many young people are increasingly using Scots for text conversations on their mobile phones.

"Even one generation back people were saying oh, they're losing their Scots, or they're not quite as broad as their parents, but they're actually writing mair [more] Scots now, because every five minutes they're texting fowk [people], saying 'fit are ye deein efter' [do you have plans after school] because it's just easier, it's more comfortable."

For the time being Scots is not as developed in the Scottish education system as another minority language, Gaelic. For example, there are no Scots-medium schools, where the whole curriculum is taught in Scots; while there are a number of Gaelic-medium primary and secondary schools dotted around the country for the estimated 60,000 Gaelic speakers.

But Mr Fairbairn sees a burgeoning interest in Scots, which co-opts many loan words from old English, Gaelic, French, Nordic languages and even Flemish, and a trade relationship with the low countries stretching back to the 12th century.

"The school introduced last year a choice for 13 and 14 year olds, to learn either French or Scots. And 58 kids chose Scots so it's almost 40% of the cohort" he says.

"They can also do other languages, and we want as many languages spoken as possible, but when there's a choice of Scots, fowk [people] are voting with their feet."

London says 'no' to Scotland over new independence vote