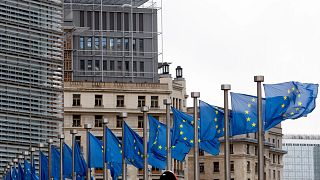 Representatives from more than 130 European organisations are calling on EU lawmakers in Brussels to introduce tougher laws and clamp down on the "exploitative" ticket resale market.

In an open letter ahead of a meeting on 15 March about the EU's proposed Digital Services Act, organisations from the world of pop music, ballet, opera, theatre and comedy say they are "fed up" with the current system "which drains hundreds of millions of euros from the live sector annually."

Grouped under an umbrella pressure group called FEAT - Face-value European Alliance for Ticketing - the signatories say that ticket resale marketplaces are a "hotbed for illegal activity."

The main concern is that professional ticket scalpers resell tickets "for a significant profit" and this is often fraudulent because it breaks consumer protection and competition laws in many EU countries.

FEAT, which brings together not only cultural industry bodies but artists and performers, managers and booking agents, event promoters and venues themselves, says that the resale market "supports tax evasion" as well, and that EU countries are missing out on "considerable tax revenues" due to their activities.

What is the EU's Digital Services Act?

The EU's proposed Digital Services Act would update two existing pieces of legislation to create a safer digital space where the rights of users are protected. It would also aim to enable online innovation, growth and competitiveness.

FEAT says they want the EU to ensure the new Act has clear rules for marketplaces so that sellers can be easily and accurately identified.

"This means obtaining and making best efforts to ensure the name, address and bank details of the seller, and the products offered, are legitimate" the group's open letter says.

They want fans to be able to buy tickets safely, and without the risk of being the victim of a scam.

How are ticket resales risky for consumers?

The European Consumer Organisation BEUC outlines a number of risks for anyone buying concert tickets from unauthorised ticket resale companies or scalpers. Some of the main risks include:

Many European countries already have their own consumer protection laws in place which prohibit ticket resales.

EU-wide legislation was introduced in 2019 to curb cross-border ticket sales where bots snap up event tickets, then sell them at an inflated price soon after.