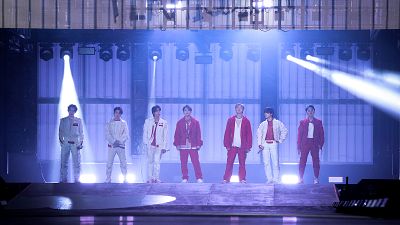 South Korean supergroup BTS returned to the stage in Seoul on Thursday for the first time since 2019.

The show marked the first of three concerts for their 'Permission to Dance on Stage' tour at the capital's Olympic Stadium.

Since BTS' last performance for domestic fans in 2019, the band has gone from strength to strength despite the pandemic, with three Billboard-topping singles and two Grammy nominations.

No singing, screaming or chanting

Due to COVID regulations, fans were barred from singing, screaming or chanting.

Instead, attendees were handed fan clappers before the show in order to show their support.

Band leader RM, whose real name is Kim Nam-joon, said they were thrilled to be performing in front of a live audience again.