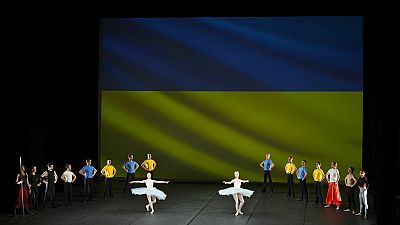 At any other moment in time, the Kyiv City Ballet’s residency at Paris' Théâtre du Chatelet would be a dream come true for the young company, and on Tuesday night they received a standing ovation after they danced the last official performance of their French tour. But now Paris and the city's ballet community have now offered the troupe temporary accommodation as they are effectively stranded in France.

“We are both physically and emotionally exhausted,” said Ekaterina Kozlova, the company's deputy director. “Everyone in the ballet is worried about their families, loved ones, friends, colleagues at home. It’s been very difficult.”

The Théâtre du Chatelet, in the heart of the French capital, offered them the stage on Tuesday for the last show of a French tour that has left the company stranded after the war broke out in Ukraine.

The dance director of the Paris Opera along with some of her company’s best joined them for an open class before performing together a medley of ballet classics, with excerpts from Russian composer Pyotr Ilych Tchaikovsky’s Swan Lake and The Nutcracker.

Being given the opportunity to train and dance was for many a chance to focus on “something other than the conflict in Ukraine,” Kozlova said.

One of the dancers will be headed to the Ukrainian border in the coming days to pick up her young daughter who was accompanied out of the country.

Only a part of the company was travelling around France performing a shortened version of The Nutcracker for young audiences — most of the dancers in Paris are in their early 20s. Many of the ballet’s star dancers stayed behind, waiting to join their friends after they reached Paris.

“Most of our artists are stuck in Ukraine,” Director Ivan Kozlov told the crowd.

The city of Paris and the ballet community have helped find temporary accommodation for the Ukrainian dancers who say they wish to continue dancing in France and elsewhere. The Chatelet theatre offered the entire group a residency, although Tuesday's last-minute performance is their last for now.

All proceedings from their performances will go to nongovernmental organisations collecting and shipping humanitarian aid to Ukraine and neighboring countries.

Ukrainian dancers have also sought refuge elsewhere. The Romanian National Opera offered six ballet dancers fleeing from the war in Ukraine a chance to work with their ballet corps, and some of them could be performing in a month.