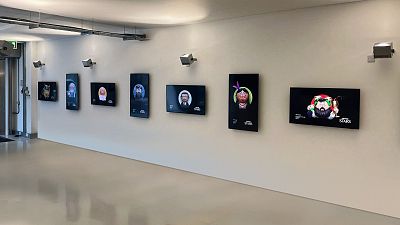 Often asked questions about NFTs are; where are they and do they exist?

While the blockchain phenomenon may seem ephemeral, it certainly attracts a lot of capital and nervous investors will finally have these existential questions answered by the UK’s first NFT gallery, Quantus.

Soft launching at the start of March, Quantus is a first as it brings digital art into a literal space.

“We are trying to blend that digital element to the physical world,” says co-founder Josh Sandhu.

While NFTs have taken off in recent years they remain a mystery to many. Non-fungible tokens are a unique digital asset, the identity of which is stored on a blockchain, essentially in perpetuity.

NFTs have found favour due to their ability to prove ownership and impossibility of damaging or breaking, but remain a mystery to many.

Rising to public prominence in earnest in 2021 with the record sale by artist Beeple’s work for nearly €62 million, the blockchain technology has since seeped into every industry from wine to gambling, with stars like Quentin Tarantino and Serena Williams getting in on the act too.

With such a saturated market, what is Quantus offering that’s different?

“Money flows from market to market depending on what is happening in the world,” says Sandhu.

“With that in mind we want that security aspect with some of the things that we are working with.”

Many purchasers buying works from Quantus will find themselves also getting a sculpture or a painting, however these works of art will be incidental.

“The product is the NFT rather than the physical painting,” Sandhu says.

“To get there the artist has to get the materials and then turn that into a digital asset.”

Sandhu has been dabbling in blockchain for a decade, but not everyone is such an old hand.

Newcomers entering the NFT marketplace will find an unregulated industry with no shortage of scammers and bad actors, with fraud, forgery and plagiarism commonplace.

Giphy previously warned that user-created gifs are being sold as NFTs while many artists have complained of their work being taken and turned into NFTs without permission.

Recently, high-profile ‘Tales from the Loop’ author Simon Stålenhag caused a stir when he was disgusted to find his work on NFT site Marble Cards, with no knowledge of how it had got there.

At the other end of the spectrum are people who completely (but innocently) misinterpret what is feasible to make into an NFT vis a vis copyright law.

Earlier this year an enthusiastic collective of ‘Dune’ fans called Spice DOA attempted to purchase a copy of Alejandro Jodorowksy’s long lost adaptation of the sci-fi novel to turn into NFTs.

The group paid roughly €2 million for the book at a Christie’s auction, falsely believing they would own the copyright. However, the only thing the decentralised autonomous group earned themselves was big helping of derision from people on the internet.

To help the curious but unwitting buyers dipping a first toe into the world of NFTs, Quantus has a dedicated advisory team. This team of professionals will help with everything from NFT drops, price guidance and how to set up a wallet; all to make sure their customers aren’t taken advantage of.

“It is in our interest to make sure people are educated,” says Sandhu.

“At this point NFTs and their ecosystem have been getting a lot of press in the last year and a half.

“It is something people are unfamiliar with.”

What is different about Quantus?

Quantus is located in the fashionable London neighbourhood of Shoreditch; ideal for bringing a futuristic phenomenon into the old world of gallery art. But the art space won’t be putting on running of the mill exhibits.

Although galleries in the US and Russia have hosted NFT exhibits, Quantus is a rarity in that it will host solely NFT work.

“We are going to have various interactive elements,” says Sandhu.

“We want it to be more of an experience.”

A big opening is planned for the hybrid space on 23 March with artists and influencers in attendance, and famed NFT artists like Pierre Benjamin and Glenn Fox will be there to see the space where their work will be displayed.

Whether the meeting of digital and physical is something the world is ready for only time will tell, but Quantus is certainly an exciting step for an already groundbreaking technology, making an otherwise abstract purchase concrete.