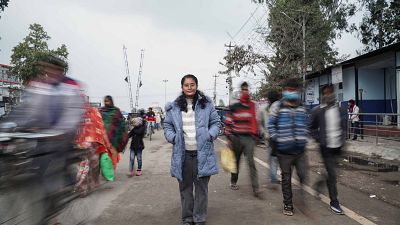 In Nepal, a group of young women use their voices to help change the world they want to live in and engage in important issues that affect them the most. They tackle serious issues and present their campaigns to politicians demanding change for a better future.

Despite economic growth averaging 4.8 per cent over the last decade, Nepal remains one of the poorest countries in the world, as the government is trying to rebuild its economy after the Covid-19 pandemic. Female children are still not considered to be a priority in the political agenda when it comes to issues like child marriage, child trafficking and exploitation.

Child safety campaigner Neelisha Giri was separated from her parents as a young child. The teenager is from Nepalgunj, a city near India's southern border.

"If I would have been trafficked at that time, I have no clue how my life would have been now. I still fear when I think of what has happened. Where would I be now? What would happen to me," says Neelisha.

They were travelling in a rickshaw from neighbouring district Bardiya, some 40 kilometres away from her city, when they stopped for a break.

Neelisha's mother, Kamala Giri, recalls how the nightmare day unfolded. "We looked for her everywhere but couldn't find her. Then we reported it to the police. We informed other organisations as well. We informed all our relatives in our town and everybody started looking for her. We found her after six or seven hours in India near the border," says Kamala.

Education is an essential

Education is an essential factor in combating the worst forms of child labour, including human trafficking, poverty, social exclusion and gender bias. Plan International is an independent development and humanitarian organisation that advances girls' rights and equality. The NGO is working hard in the region and compiled a report on girl and young woman trafficking in Nepal.

Plan International started the PROTECT (prevention, tracking, education and transformation) programme to stop child and human trafficking in Nepal. The main goals of the project are to strengthen prevention mechanisms against child trafficking, improve the repatriation process and support survivors safely.

As part of the programme, youth campaigners were mobilised as key actors in the community. Neelisha was one such campaigner and was provided training by Plan International on anti-trafficking awareness and given resources to create advocacy campaigns in her local area.

A chatbot helping victims of trafficking

One resource was a chatbot named Maya designed by Plan international to help victims of trafficking. This gave a platform for Neelisha to act as a youth ambassador for Plan to tackle human trafficking.

Neelisha started using the chatbot to reach out to girls who needed help with certain issues. Dozens of parents used the online service to help find their missing children. It was a success and local authorities received the necessary information.

Neelisha knew there was more to do and with the support of her family, she set up a local children's club helping educate the community about keeping their children safer. Helplines were set up to inform parents about the dangers of child trafficking and its harm to children. Soon the task was too big for Neelisha alone and she put a shout out to other campaigners in the area to join her crusade.

The effects of Neelisha's heroics and social networking are tremendous. In some parts of the country, the percentage of child marriage has been reduced to zero.

"We are free of child marriage today, at least onward and village committee levels, which brings a sense of one level of accomplishment," says Anu Raut, a child campaigner.

Achievements like Neelisha’s are celebrated on International Women’s Day, a global day celebrating the social, economic, cultural and political achievements of women. The day also marks a call to action for accelerating women’s equality. Which Neelisha fully supports and will continue to campaign for.

In response to her heroism, Neelisha receives hundreds of messages of inspiration, support and gratitude from parents. In the future, Neelisha hopes to further her education whilst supporting children's well-being. Her dreams are to continue working with Plan International and open more children's clubs in the region.