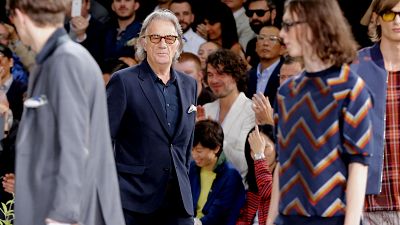 Veteran designer Paul Smith's emergence into fashion was something he stumbled into. It wasn’t his first career choice.

From Nottingham, England, Smith wanted to be a professional cyclist but a serious bicycle accident at the age of seventeen halted that, and fifty-nine years later Smith’s brand has a presence in sixty-two stores around the world, some of which he owns.

He’s one of very few designers who has sole ownership of his brand and he doesn’t seem to be slowing down anytime soon.

In the midst of the hustle and bustle of Paris Fashion Week, Smith sits down with Euronews Culture to talk about his collection and his journey thus far.

In a side room with the women’s autumn-winter 2022 pieces peeking through, Smith opens up about the collection, his love of tailoring, his wife Pauline, and a myriad other topics.

The Paul Smith SS22 collection was held in the intimate setting of his Paris showroom instead of a runway show.

The brand opted for a presentation where Anaiis sang and Smith opted for describing each look of the collection to his audience. “I was nervous to do it to be honest because there were so many extravagant shows around the world. It seemed like an incorrect time to do it but we’ve got this beautiful building, and how lovely it is to talk directly to the designer,” he states.

If you know the brand, you know Smith is gifted in tailoring. The way he cuts and sews a jacket or coat together will bring a tear to the eye of the jacquard lover. “I love craftsmanship, not just in fashion but also in carpentry, furniture, and embroidery,” he explains.

Even in this new collection in both the men’s and women’s looks you see his detailing is in the tailoring, but he had an unconventional start to learning the craft. “I was fifteen when I left school and between the ages of twelve and eighteen I was a racing cyclist. At the age of twenty-one I met Pauline. I never had any formal training and at home and she taught me all about cutting the patterns to make the clothes but also about making the clothes.”

His wife is Pauline, a fashion designer turned artist who studied at the London College of Fashion.

“She came to live with me and taught me about fashion, and eventually she said to me, ‘you know Paul, you have so many ideas and you’re full of energy, why don’t you own a little shop,’” he remembers. And that’s just what they did, they started a shop in Nottingham. For many years she did the designing and Paul handled the other parts of the business.

Today, Pauline is retired but she continues to paint. Emotionally she’s a big influence for Smith.

“She’s very stylish and has an opinion and through friendship and love, I welcome her opinion on color and texture. Pauline is very much involved without realising she’s involved.”

In fashion there is a tradition. A cashmere sweater is a cashmere sweater, pants are pants. But somehow the Paul Smith brand has been able to master modernity within the tradition of clothes making.

“There is for sure in every level of fashion a sort of constant. Then there’s the tradition of craftsmanship but even that’s changing quite a lot,” muses Smith. “But at Paul Smith we still have a lot of craftsmanship in our tailoring and in our clothing. And this comes from my love of things done by human beings, and my love of imperfection. When things are mass produced they are so perfect, so they often don’t have any character. But when you put a sleeve in by hand there will be little imperfections around the sleeve head, or if you stitch the lapel by hand there will be a little pucker that pulls in. And that’s just a treat for my eyes. A lot of people will think of it as a mistake but I find it a joy.”

The new world of NFTs

Brands from Burberry, Dolce and Gabbana, and couture brands like Rami Kadi have moved in this direction.

“Blockchain in fashion are illusions of things that aren’t really real. I understand it. It’s not something personally that I’m going to get involved with because it doesn’t fit my aesthetic because my aesthetic has more to do with comradery, conversation, texture, touch, and friendship as opposed to a screen and world which is more dream-like. I don’t have a problem with it but it’s not something for me and the business.”

The new collection delves into the world of arthouse cinema, where Smith took inspiration from avant-garde, surrealist, and New Wave films and their directors who impacted the aesthetic side of their art.

The men’s collection goes deeper into the 60s era and art films from France, notes Smith.

It’s a versatile collection and fitting for the times where the world favours comfy wear that became the norm during the pandemic. The textiles used are stretchy and relaxing.

Pointing to a suit he just created, “this is a corduroy suit, it’s cashmere, cotton corduroy and comfortable,” he points. “There’s hardly any construction inside the jacket, so it’s very easy to move. This jacket here is herringbone but it’s a jersey fabric, obviously it is knitted rather than woven so that means you can move in it. It’s also got a very high arm hold so you can move very comfortably with it, and silk satin so very fluid and comfortable.”

With a fifty-two-year legacy under his belt, Smith has done exceptionally well for someone who stumbled his way into fashion. He gives credit to his wife and his love for the craft.

“The love of life is very important and keeping my feet on the ground, and Pauline without question has been very important. When you’ve got security at home that means you’re not searching for anything at home, and you are content with your daily job. Through absolute ordinary down-to-earth-ness, the business has grown organically and never through anything like a rocket.”

It’s his laid-back, humility, kindness, and ability to be patient that has enabled Smith to have a brand like he has, one that’s fully independent and that he owns with showrooms in Milan, Paris, New York, London and Tokyo.