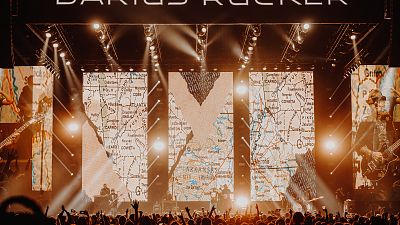 The hit music festival Country to Country (C2C) was off to a bang last weekend after a pandemic hiatus.

The festival, which is shared between London, Dublin, and Glasgow, drew country music connoisseurs from all over Europe, and arenas were packed despite typically bad weather in the UK and Ireland when it took place the weekend of 11 – 13 March.

“We couldn’t wait to get here,” added the singer who headed a lineup on Friday that included Tenille Townes, Scotty McCreery and Brett Young.

McCreery, the 10th season American Idol winner, shared with fans that he had arrived a few days early to sample the local bars.

“We had the chance to go to London and we did a few shows before the world shut down and that was awesome, and we were schedule to go back so it’s exciting to be here,” McCreery said.

Fan favourites included Brett Young wooing the audience singing, ‘You Ain’t Here To Kiss Me’ and ‘Stay Here Tonight,’ but it was Darius Rucker who got the party going by opening with his hit ‘Homegrown Honey’.

“We’re excited to be back,” said Rucker.

“We were in Europe for a run of shows when the pandemic first started and had been really looking forward to capping that off with everyone at C2C.”

McCreery is next due to tour European cities Hamburg, Frankfurt, Munich, and Amsterdam before returning to the US.

Grammy and Academy of Country Music (ACM) Award winner Miranda Lambert headlined the festival on Friday night, fresh from her Entertainer of The Year award win in Las Vegas. She was opened for by Hailey Whitters.

American singer Russell Dickerson, who opened for Lambert, has had the festival on his radar for some time.

“From the day we found out about playing C2C this year I’ve been counting down the days! Hearing my songs from a crowd on a completely different continent is just a feeling I can’t explain,” said the singer.

It’s a whirlwind 3 days for the artists on the go every day. “A lot of times we don’t really get to see the cities we perform in, because we roll in and out so quickly to get to the next place,” says Rucker.

“In Europe, though, I always try to get out and experience the local culture; see the important sites and of course try the food!”

Is country music just for Americans?

Now in its eighth year, C2C has really connected with European audiences.

Created with the ethos that anyone can like the genre no matter their nationality, it’s a festival for Europeans to see their favourite singers, from the well-established ones to the emerging talent, both European and American.

Launched in 2013, the two-day event at London's O2 Arena attracted country music royalty like Tim McGraw and Carrie Underwood. Its second year saw Dublin added to the festival, and in 2016 Glasgow was added as well. By 2019 the festival had gone global, with dates in Australia, Germany, the Netherlands, Sweden, and Norway too.

Of course, country music is no stranger to Europe with artists from like Johnny Cash, Kenny Rogers, and Dolly Parton all long-time favourites on the continent, but the popularity is clearly soaring with musician Garth Brooks selling out tour dates in Dublin this September.

Europeans, Asians, and Africans alike have taken to the genre thanks to its relatable lyrics on love, heartbreak, and family life.

“I try to write songs about what I’ve lived and what I love,” says McCreery.

“My fans [are] all over the world and I have a lot more than in common than we’re different.”

Seeing people flock from all over Europe, donning their typical country-style attire is a sight to behold. Men and women wear fitted blue jeans with a flare at the hem, a buttoned-down blouse tucked in with a leather belt, and accessories to complete the look: cowboy boots, a cowboy hat, and a bolo.

What the past several years have proven is that the genre has no bounds. It has seen an explosion of digital content on YouTube and digital radio around Europe, as fans are drawn to the honest storytelling ballads of heartbreak, love, faith and folly.

Blues legend Ray Charles used to speak of the powerful storytelling in songs: “the words to country songs are very earthy like the blues.”

“Now that we’ve had two years of anticipation, all I can say is that it’s going to be a great show," says Darius Rucker.

In 2018 more than fifty thousand country music fans attended the festival and this year an even bigger turnout is expected.

“At its core, country music is about great storytelling,” said the singer.

“It really speaks to how much we all have in common at the end of the day; whether that’s in America or all over the world.”