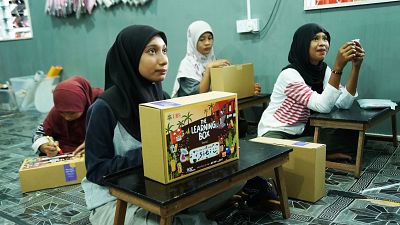 Mukmin Nantang didn't think he would become an educator to hundreds of children when he founded Borneo Komrad five years ago, but his mission was clear. He wanted to provide basic education to stateless children within his community.

"In Malaysia, there's a community known as 'stateless'. This community consists of people without a country," says Mukmin.

According to the 2010 Malaysian Census, Sabah, a Malaysian state occupying the northern part of the island of Borneo, has the highest proportion of non-citizens. One in four of Sabah's 3.9 million residents are stateless.

Mukmin knew the best way to help people was to avoid politics altogether. To figure out how to solve problems faced by marginalised communities, he founded a grassroots social movement.

He decided to set up Sekolah Alternatif, which translates to Alternative Schools. Maths, English, sewing, cooking are taught, along with traditional subjects such as Malay language and religious studies.

However, they also teach outside the classroom taking the children hiking and camping. The older students have the option of being mentored for a job. Training to be local guides in the popular tourist spot of the surrounding Borneo island which is famous for being one of the most biodiverse places on the planet. Home to an estimated 15,000 different species.

A right to an education

Their main message is equality and everyone has a fundamental human right to an education, including children. A good education was a part of Mukmin’s upbringing while he witnessed others not being given the same opportunities.

"My house is surrounded by a village which is labelled as squatters. I befriended them. When we played marbles, played football there, we didn't ask, 'What race are you? What's your religion? Do you have documents or not?' We just played, but I started to wonder why can't my friends go to school. For me, that's one of the things that impacted me strongly," he tells Scenes.

Currently, there are three schools open in Sabah, with an average of 50 students attending. The school raises funds through crowdfunding. Community members donate to ensure these children can attend school free of charge. Other revenue sources include NGOs and the sale of homemade products by the students themselves.

The schools have inspired children to learn and grow as individuals and raise their aspirations to achieve something in life.

The children really enjoy the Alternative Schools methods. The school asks students what subjects they want to learn and there are no strict dress codes or uniforms.

“We believe education is very subjective,” explains Borneo Komrad teacher Norazni binti Syaripudin. “In Semporna Alternative School, we as teachers give freedom to the children. We ask them every day 'What do you want to learn today?’ For example, today I taught them health and safety and I gave them the freedom to choose what they want to learn next and they replied ‘CPR’,” she adds.

Contributing to the community

The schools also teach about social rights and what rights the children have as individuals living in society. The whole mantra of the school is for them to be accepted and contribute to their community in a positive way.

Mukmin hasn't just created schools. He's created awareness on issues that were ignored or not understood by communities. Alternative Schools bring children into society, where they have often been neglected in order to make a change in the community and more importantly, within themselves.

Meet the skier flying the flag for 1.4 Billion Indians at the Winter Olympics