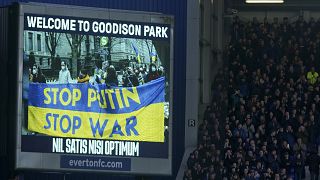 A screen shows support for Ukraine before the English Premier League match between Everton and Manchester City at Goodison Park in Liverpool.   -   Copyright  Jon Super/AP
By Marthe de Ferrer  with AP  •  Updated: 28/02/2022

'Saturday Night Live' normally kicks off each show with some humour, but the comedy sketch series opened with a tribute performance to Ukraine amid the ongoing Russian invasion.

The Ukrainian Chorus Dumka of New York performed a 'Prayer for Ukraine' during the opening of SNL on Saturday. Cast members Kate McKinnon and Cecily Strong introduced the choir.

The choir sang the melancholy tune in front of a live audience and a table of candles that spelled the name of Ukraine’s capital city, Kyiv.

It was a touching, emotional and at times uplifting day in the Premier League on Saturday, marked by messages of solidarity across the country from players and fans toward those in - and from - Ukraine following Russia's invasion.

Nowhere more so than at Goodison Park, where the football - Manchester City beat Everton 1-0 to move six points clear at the top - felt somewhat insignificant as City's Oleksandr Zinchenko and Everton's Vitaliy Mykolenko, two Ukraine internationals, walked toward each other during the warmups and hugged.

After taking their respective places on the substitutes' bench, the players were seen in tears as 'He Ain’t Heavy, He’s My Brother' by The Hollies was played inside Goodison Park. Everton players were draped in Ukraine flags.

Everton usually comes out for games at Goodison to the 'Z-Cars' theme that features an air-raid siren. Not this time, as a mark of respect.

At Old Trafford, where Manchester United was held to a 0-0 draw by Watford, players from both teams came together before the start of the match behind a sign showing the word “peace” in several languages.

And at Brighton's Amex Stadium, Matty Cash scored the goal that sent Aston Villa on its way to a 2-0 win and marked it by taking off his jersey, revealing a message to a teammate in the Poland national side who plays his club football in Ukraine.

Russian and Ukrainian delegations to meet near border with Belarus