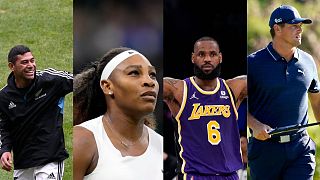 NFTs are penetrating every market, but which sports personalities are getting in on the act?   -   Copyright  AP Photo
By Tim Gallagher  •  Updated: 26/02/2022

The deal will see Capital block, who are also the new sponsors of the team, creating unique collectibles and conducting outreach work to help fans understand the value of NFTs and how they work.

NFTs are fast becoming an unavoidable part of modern life and have seemingly found their way into every industry from wine to gambling.

Announced word of the year 2021, NFTs are unique collectibles established on a blockchain. Blockchain technology means that the origin and ownership of NFTs can always be proven.

While much has been made of the potential of this technology to revolutionise the art world, and many celebrities have gotten in on the act, stars of the sporting world have also jumped on the blockchain bandwagon.

So whether they’re famous for their style on the tennis serve or their golf swing here’s a run down of some of the bug names in Sport who’re getting into NFTs.

The 23-time grand slam champion is already internationally beloved for her presence both on and off the court, and tennis’s most recognisable face is turning her talents to the world of NFTs.

At the start of this year Williams joined the board of Sorare, a French start up whose NFT trading platform has over a million users worldwide.

Sorare provides a global fantasy sports platform which allows users to purchase payer tokens, play fantasy matches and earn crypto rewards. Williams was brought in to increase Sorare’s reach in North America and allow them to branch into women’s sports.

At the time, Sorare CEO Nicolas Julia told Forbes, “When you have the ambition to build the biggest entertainment group in the world of sports, and you have the opportunity to partner with one of the greatest athletes in history, you want that perspective."

Shortly after Williams, whose husband Alexis Ohanian is a tech entrepreneur, shared a pink ape NFT on Twitter.

Ohanian had previously showcased an NFT he purchased, inspired by Williams, on the Met Gala red carpet.

‘Trailblazing’ Bryson deChambeau was the first pro-golfer to release his own line of NFTs, dropping a line of five rading cards for fans earlier this year.

The US golf pro, who won the 2020 US Open, released his likeness on five limited edition cards which came with a selection of added bonuses for eager buyers.

One card was unique and came with a meet and greet, autographed US open flag, and set of golf clubs. Meanwhile the four other cards had 18 copies.

“Bryson is a trailblazer in every sense of the word,” Brett Falkoff, Bryson DeChambeau’s agent, told GOLF.com.

“We are thrilled that Bryson will be the first professional golfer to have his own NFT. Bryson is always looking at new and ways to innovate and grow the game of golf. We believe this is a unique opportunity for Bryson to continue to stay ahead of the curve”.

The sale when it occurred wasn’t as lucrative as the golfer might have hoped, with only 10 of the 73 NFTs available going for an approximate $64,000.

Kiwi Rugby Player Charles Piutau is known for his team building both on and off the pitch.

When Piutau isn’t playing fullback for British Rugby Union team Bristol Bears he’s concerned with the welfare of his fellow pacific islanders, and this is reflected in his approach to NFTs.

Setting up Ruggerz NFT last year Piutau aimed to get young people engaged in his beloved Rugby, and planned to donate money from sales to the Pacific Rugby Players Welfare Fund.

“It’s a balance, too. Between celebrating the superstars of our sport, but also trying to grow the game,” Piutau told Rugby Pass.

“We’ve been crying out for something like a good video game to reach a younger audience and while this isn’t it, it might reach different people and maybe a different generation.”

Vinícius Júnior (or Vini Jr.) was just 16 when he debuted for Brazilian club Flamengo, and at 21, now a star striker for Real Madrid, he is making his debut into the world of blockchain.

Vini Jr. plans to release a limited collection of artworks and ‘remarkable career moment’ trading cards to football fans which will celebrate his successful opening years in the game.

To sweeten the deal Vini Jr. also offered buyers the tantalising opportunity to play an online FIFA game with him.

Announcing the sale the top player said, “these items have great sentimental value to me as they were carefully chosen moments that marked my life.”

We’re being a bit cheeky here as LeBron James is only one of many NBA stars to take part in NFT sales, with the entire basketball league at this stage deeply embedded in blockchain through their platform Top Shot.

An NFT of James dunking did sell for $208k on Top Shot, a platform where NBA collectibles are routinely sold to fans and where $230 million was reportedly spent on the platform by this time last year.

The site also allows for cards to be traded by fans, leading some to think of it as the next generation in collectibles.