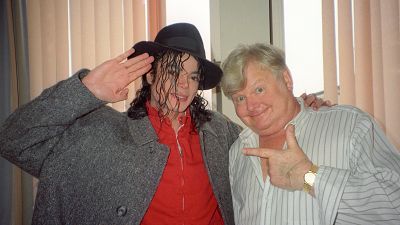 The year was 1992. Michael Jackson was still arguably the most famous person on the planet. British comedian Benny Hill, however, was convalescing at London's Royal Brompton Hospital following a heart attack eleven days earlier, his TV show had been canned and two months later he would be dead.

And in this unusual, singular situation, Jackson was the fan.

This unlikely meeting is, exactly thirty years later, the subject of a brand new audio drama, entitled 'When Michael Met Benny'. The piece, written by Jonathan Morris, explores what may have taken place in that room.

"The idea from this came when I saw something on the internet saying 'did you know that Michael Jackson was a huge Benny Hill fan and that they met, and Jackson visited Benny Hill in hospital a few weeks before he died, and there are photos of it?', which just struck me as an incredibly unlikely situation," Morris tells Euronews Culture.

"They were two very, very different people and yet they had this connection. Michael Jackson wasn't just a Benny Hill fan, he adored him. Benny was his favourite comedian in the world. He collected every videotape, he was obsessed by him. So I just thought: there's a play there."

When Michael Met Benny is being released as a free drama podcast by Morris' audio production company, Average Romp. It stars Daniel Anthony as Michael and Phil Nice as Benny.

"It could be the next Frost/Nixon," quips Morris, who has also written for Doctor Who and impersonation favourite Dead Ringers. Indeed, writing convincing narrative voices to portray two such extraordinary stars is no mean feat.

"I wanted to capture the voices of the real people involved. And do so fairly and honestly," Morris explains. "It was particularly difficult with Michael Jackson because he gave very few interviews, and in the interviews he did give, you can tell he's being quite guarded in what he says. He was a very private person. So how he would have been with Benny Hill is not how he would have been with other people, because in this situation he's the lower status person, he's the fan visiting his hero."

Benny Hill in a Jacko video?

"When the meeting took place, there were a couple of other people in the room with them," Morris notes. "One of whom was Hill's TV producer, Dennis Kirkland, who wrote a biography of Benny Hill after Benny's death. And he mentioned Benny Hill making a joke about offering Michael a Coca-Cola and Jackson refusing it because he had a Pepsi deal at that time.

"There was also a genuine discussion about them teaming up to do a sketch either as part of a new Benny Hill Show or having Benny Hill turn up in a Michael Jackson video. And so in the play, I have them working out the sketch where Jackson does a dance move and then Benny Hill copies it, and then they speed up the tape so that Benny Hill is actually dancing faster than Michael Jackson. That's the sort of stuff that, according to the producer, they actually talked about."

Who was Benny Hill?

A question that very much depends on your generation. The majority of people under the age of 30 don't have the reference. But one or two age groups up from that and you'll have virtually no-one in the UK or the US that hasn't heard of him. He'd been a radio and TV star since the 1950s but really hit big in the very late 1970s when his sketch show - a heady mix of frenetic burlesque, madcap pantomime and double entendre - won ratings on both sides of the Atlantic.

Though Hill had a fan roster boasting such disparate names as Charlie Chaplin, Anthony Burgess and Snoop Dogg, his brand of cheeky slapstick was not to find favour as the 80s turned into the 90s. Critics labelled his show sexist and smutty. His defenders would point out that women always came out on top in his sketches, with Hill himself often the butt of the joke. But as for his private life, like Jackson in so many ways, the realities were never coaxed out of him publicly.

The heart attack that brought him to the Royal Brompton Hospital in February 1992 was the herald of the coronary thrombosis that killed him two months later at the age of 68.

"Both of them publicly said that they didn't find adult relationships something they were into. Benny Hill had a bit of a phobia about having sex with women and Michael Jackson, as he said in interviews, felt he was still a child in some ways, that he'd missed out on his childhood," says Morris.

Certainly, this is one area where Jackson has been mired in controversy.

Child molestation allegations dogged the singer for years, and the 2019 HBO documentary ‘Leaving Neverland’ raised them again. The once-dead lawsuits brought by the two men featured in it had been revived by changes in the law but both ended up being dismissed.

The two men featured in the documentary are appealing the dismissals of their lawsuits and HBO has defended "Leaving Neverland" as a valid and important piece of documentary journalism. Jackson's legacy will unlikely recover fully.

Benny Hill's comedy still generates debate, largely centred around allegations of misogyny and general outdatedness, which made it something of a surprise when UK broadcaster That's TV brought him back for Christmas 2021 and beyond.

What's next for When Michael Met Benny?

"This idea could be taken further," admits Morris. "It's a neat, self-contained play that anyone could put on if they can find an actor who can be Michael Jackson and find an actor to be Benny Hill, which isn't easy because they are very distinctive people who not anyone can play. I know there's been talk of doing a Benny Hill musical in the West End, but I think you could do a full-length film if you focus on that year of his life when he went from being an award-winning international comedian, loved in America, winning the Best Comedian Ever award, to getting his show axed, discovering that nobody wanted him in the UK and being vilified in the newspapers."

When Michael Met Benny is available as a free drama podcast on all podcast platforms.

A robot that makes fondue? It has to be Switzerland...