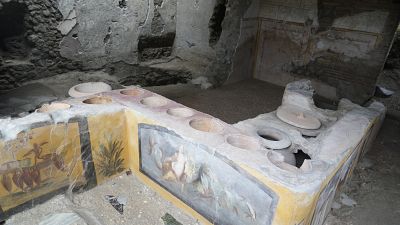 In a few horrible hours, Pompeii went from being a vibrant city to a dead one, smothered by a furious volcanic eruption in 79 AD.

Cut to the present day and Pompeii sits on the precipice of a second death, assailed by decades of neglect and mismanagement of its heavily visited ruins.

The collapse in 2010 of a military hall commonly referred to as a gladiators' barracks alarmed the world and risked costing the archaeological location its coveted designation as a UNESCO World Heritage Site.

But now, Pompeii is experiencing a rebirth.

Work is underway to preserve the ruins and prevent further collapse.

Under the direction of the archaeological park's new, young, German-born director, Gabriel Zuchtriegel, innovative technology — including drones, robots and artificial intelligence — is being explored in a bid to restore some of Pompeii's nearly obliterated glories.

The Great Pompeii Project - an infusion of some 100 million euros in European Union funds, with the proviso that the aid be spent promptly and effectively - has crucially helped save the ruins.

After the military hall's collapse, engineers set to work on a stabilisation strategy.

Excavations undertaken as part of engineering efforts to prevent more disasters are yielding a raft of exciting insights.

Near the far end of Via del Vesuvio, the removal of tons of earth in 2018 revealed an upscale domus, or home, with a bedroom wall decorated with a small, sensual fresco depicting the Roman god Jupiter, disguised as a swan, impregnating Leda, a legendary queen of Sparta.

And archaeologists are learning about the differences between the city's residents.

"You perceive the difference between the servants quarters and the master's living spaces inside the house and you understand the difference also with respect to their health when the victims are found because you find many who have a series of illnesses from overuse from too much work, those are the illnesses typical of the slaves while there are traces of illness in the rich such as gout and things like that," explains Russo.

What did people eat in Ancient Pompeii?

New discoveries provide a glimpse into the eating habits and tastes of the great masses of Pompeii's residents not affluent enough to have a kitchen, as the lens of social class is increasingly applied to new discoveries.

This corner 'thermopolium', popularly referred to as the snack bar, was uncovered as part of the recent works to shore up the ruins.

It's unlike any of the nearly 90 hot-food eateries so far unearthed in Pompeii.

This fast-food locale is the only one discovered so far with vivid frescoes in mustard-yellow and the omnipresent Pompeii red hues decorating the counter's base, apparently advertising the chef's specialties.

Judging by the organic remains found in containers, the menu featured concoctions with ingredients like fish, snails and ducks. The quick meals, enjoyed in the street, were likely a mainstay of the majority of ordinary Pompeiians.

Funding the preservation of Pompeii

Much of Pompeii's revenue is based, not on funding by the Italian government, but on ticket sales, vital cash flow for research, conservation and restoration.

From a high of 3.8 million visitors in 2019, in 2020 when the pandemic struck, some 565,000 came and last year, the second year that government lockdown measures forced weeks of closures, just under a million people visited Pompeii.

Zuchtriegel wants the wider world to also be stakeholders in helping Pompeii to survive.

Check out the video above to see Pompeii's recent archaeological discoveries