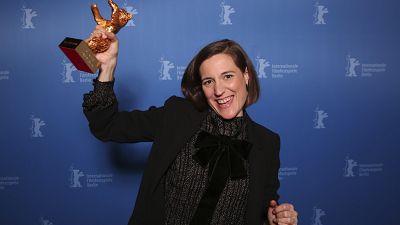 The project, picked from a field of 18 contenders by a jury led by American filmmaker M. Night Shyamalan, is also the first Catalan-language film to pick up a Golden Bear in this category.

‘Alcarràs' portrays the dynamics of a family who spend their summers picking peaches in an orchard in a village in Spain's Catalonia region. The group faces problems when they come up against new owners who plan to replace the peach trees with solar panels.

'The Sixth Sense' and 'Split' director Shamalyan’ said ‘Alcarràs’ was honoured for “the ability to show the tenderness and comedy of family and struggle, and for the betrayal of our connection and dependence on the land around us," praising the its extraordinary performances.

The win makes 35-year-old Simón the third young female talent in a row to be crowned by a major festival in 2022.

French director Julia Ducournau won big at Cannes for 'Titane' and Audrey Diwan received recognition in Venice for 'The Event'.

Simón was rapturous about Berlinale's female domination, praising the increase in role models for aspiring women in the industry.

"It's a trend that is here to stay,” said the director.“When I was a student, it was difficult to refer to female directors, but little by little it is changing, because there is a will, because that we are half of humanity and that we must therefore tell half of the stories. But we are not there yet,” she said.

Kaptan plays the mother of a German-born Turkish man, Murat Kurnaz, who was held as a suspected terrorist at Guantanamo Bay for four years. He was released in 2006 and returned to Germany after a ruling from a U.S. federal judge and intervention from the German Chancellor Angela Merkel.

French director Claire Denis was chosen as best director for her new film 'Both Sides of the Blade,' starring Juliette Binoche.

The grand jury prize went to the Korean movie 'The Novelist's Film,' directed by Hong Sangsoo, another sign of the rising wave of admiration for Korean content in international cinema.

A love letter to rural Europe

The Golden Bear win for Simón also sheds light on the future of agriculture and peasants at a time when rural communities in Europe face fresh challenges.

The director, who lost her parents very young and grew up near where her film is set.

She thanked her family, "who grew peaches and without which (she) would never have been so close to this world".

Carla Simón has already received a first film award in Berlin for 'Summer 1993' in 2017, and dedicated her award to "small farming families who cultivate their land every day to fill our plates".

Berlinale is the first of the year's major European film festivals. It went ahead this year in a pared-down format designed to bring audiences back but reduce COVID-19 infection risks at the same time.

'The Time Traveller's wife' gets HBO treatment for new adaptation