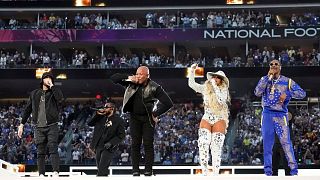 The Super Bowl made a triumphant return to Los Angeles, California with a full throttle embrace of hip-hop nostalgia lead by Dr. Dre.

70,000 people attended the game between the Cincinnati Bengals and the Los Angeles Rams at the SoFi Stadium.

Spectators were treated to fiery medley of hits in a setting that paid homage to nearby Compton, the home of West Coast rap.

Five stages were constructed to look like adjoining house parties in bungalows traditional to South LA.

Rapper 50 Cent made a surprise appearance to perform 'In Da Club' – upside down, just like the 2003 hit single's music video – and a joyous Anderson .Paak backed Eminem's 'Lose Yourself' on drums.

This year's show is expected to have been watched by at least 100 million people worldwide.

In case you missed the halftime show, here’s the whole thing: pic.twitter.com/ohtVYng482

California definitely knows how to party

Anticipation on how the spectacle would take shape with five headliners felt greater than any other year.

Excitement for the show's outcome has been building ever since a promotional video showed Dr. Dre's superhero-like assembly of some of rap music's greatest.

However, Super Bowl halftime shows' tendency to veer in an overly-rushed jukeboxes of hit songs meant that for some, there was a hesitancy that this many stars would be calamitous.

But fear not – Dre and his fellow performers, many of which are his former protege's, were able to side step this by performing roughly two hits each.

There was plenty of space, musically and physically, for each artist to shine.

going to tell my kids this was the avengers https://t.co/7e41SGwyVj

Dre and Snoop opened the show – produced by Jay-Z's Roc Nation entertainment company – with 'Next Episode' and 'California Love'.

The crowd had lanyards with LED lights that flashed in coordination with the show’s beats, turning the whole stadium into a light show.

This made way for 50 Cent's memorable entrance, hanging from the ceiling of one of the set's 'houses'.

Mary J. Blige reigned supreme as the scene's soulful queen, decked out in silver sparkles as she sang 'Family Affair' and 'No Drama'.

She was backed by a number of dancers who made slick use of the elaborate backdrop. British set designer Es Devlin, who worked on the stage for Adele's cancelled Las Vegas residency, was responsible for this year's creation.

Unbelievably, assembling and deconstructing the set famously takes less time than the show itself.

At this point, the crowd were treated to a rare performance from Compton's own crown jewel, Kendrick Lamar.

The youngest of the evening's performers at 34-years-old, Lamar delivered punchy, beautifully choreographed performances of 'M.A.A.D City and 'Alright'.

Some viewers were discouraged that Lamar appeared to have been censored during his second song, released on 2015's 'To Pimp A Butterfly' during the beginnings of the Black Lives Matter movement.

The word "po-po", slang for police, was muted out of the lyric: "And we hate po-po, wanna kill us dead in the street for sure".

Not them beeping out popo

It's rare a year goes by without some sort of Super Bowl controversy.

49-year-old Eminem made headlines this year for his alleged defiance of the NFL's instructions not to take a knee.

As his rendition of 'Lose Yourself' ended, Eminem did so in an apparent tribute to former San Francisco 49ers quarterback Colin Kaepernick, a Black athlete who made the gesture during the national anthem to protest police brutality during the 2016 season.

Kaepernick's support of the Black Lives Matter movement resulted in his release from the 49ers and a lawsuit against the NFL for blackballing him from the sport. The grievance did not escalate after the player was offered an undisclosed settlement.

The NFL denied reports that it was attempting to stop Eminem from closing his segment the way he intended.

“We watched all elements of the show during multiple rehearsals this week and were aware that Eminem was going to do that,” said league spokesman Brian McCarthy.

Following this, an explosion of fireworks lit up the sky as the sun set outside and the show ended, with Snoop and Dre performing 'Still DRE', arguably one of the world's most famous piano lines.

A healthy dose of Hollywood glamour

Celebrities in the stands of the first Hollywood-adjacent Super Bowl in nearly 30 years provided much of the entertainment at SoFi Stadium during commercial breaks.

Jennifer Lopez didn't seem to notice she was on the huge 360-degree screen at all.

About 40 minutes before kickoff, the Rams and Bengals lined the end zones and looked up at the big screen while outside, next to SoFi Stadium’s lake, gospel duo Mary Mary and the LA Phil’s Youth Orchestra Los Angeles performed 'Lift Every Voice and Sing,' a song that’s known as the unofficial Black national anthem.

Singer Jhené Aiko brought a novel combination of R&B and harp to her rendition of 'America the Beautiful'.

And The Rock grabbed a mic on the field and put on his old wrestling persona to introduce the teams just before kickoff, in the style of an announcer before a big fight.

“Finally! The Super Bowl has come back to Los Aaaaangelesssss!” Johnson said, cocking his eyebrow as he did when he was WWE star before he became a movie star.

Johnson played football himself for the University of Miami, where he won a national championship in 1991.

Rihanna heading to the Super Bowl - why the fuss?