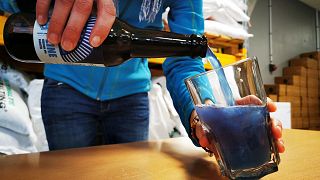 'Line' beer has employees of Hoppy Urban Brew excited about the future of their blue beverages   -   Copyright  Reuters
By Shannon McDonagh  with Reuters  •  Updated: 07/02/2022

A French brewery has cracked an ancient industry dilemma in successfully using algae with a naturally-occurring pigment to turn their beer blue.

The beer, given the brand name 'Line', is the result of a tie-up between a firm that wants to popularise the algae as a dietary supplement, and a nearby craft brewery that was looking for a way to make its beverages more distinctive.

"It's getting an enormous amount of interest and curiosity on the part of the public," he says.

How is the beer coloured?

The blue tint comes from spirulina, an algae that is grown in basins by a company called Etika Spirulina in Lille, northern France.

Phycocyanin, the component of the spirulina that gives the blue colour, is then added to the beer during the brewing process.

Breweries have been trying to achieve the extraordinary shade in hops-based beverages for some time.

Previously, many who have incorporated spirulina in their production process end up with a green colour due to the naturally yellowish tint of the alcohol.

Tasting a freshly produced bottle of 'Line' beer, brewery employee Mathilde Vanmansart described it as hoppy, light, and with fruity notes, while the only evidence of the added algae was the distinctive colour.

Xavier Delannoy, whose farm provides the spirulina, explains that after several test batches, the brewery had found a blend that appealed to customers.

1,500 bottles of the blue beer were sold between October and December last year, and the brewery is now preparing to ramp up production to meet demand.

"That's really what interests us – to try to democratise this so that it not only concerns particular types of people," Delannoy said.

"We thought that one great way to democratise a product in northern France is to make beer."

Since the last batch sold out in December, a growing demand has led the brewery to find time to make more, Verbeke says, adding that the enthusiasm around the product is "encouraging."