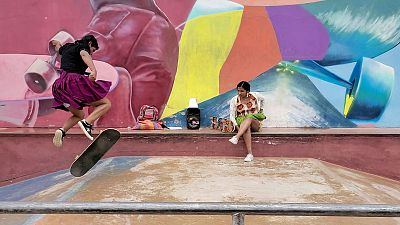 Against the grey backdrop of a skatepark, a young woman dressed in a vibrant, puffed-out skirt and long braided hair practises kickflips and ollies. “They usually think that it is a sport for men,'' says Brenda Tinta, who has been skateboarding for the past six years.

The skateboarder is part of the Imilla Skate collective, a group of young Bolivian women who skateboard while wearing traditional clothing.

With their high bowler hats, frilly skirts and elegant demeanour, the cholas - or cholitas as they are affectionately known, may look like they have stepped out of an early 20th century period drama, but this is the traditional dress of the indigenous women of Andean Bolivia.

Pride in their origins

In the Imilla crew, the 'pollera' skirt symbolises strength and empowerment. "These clothes are not a costume. This is an identity. This is what makes them cholitas and they are proud of that," explains Imilla Skate member Huara Medina Montaño. "The chola reflects the history of her heroism for liberty and independence," she adds.

In today's world, anything is possible. Brenda explains a cholita can be a lawyer, teacher, or even a TV presenter. "Why not us? As the Imilla Skate crew, we want to show people a cholita skateboarder," she says.

As boardsports have gained popularity over the past decade, skateboarders are well known on the streets of Sucre. "What interests me more about this sport is that it's a discipline that pulls you out of your comfort zone. It pushes you out of your limits and it helps you to lose fear," explains Brenda.

"Skating is like life itself, as even if you fail lots of times with a trick and you don't get it done the first, second or even the 20th time, you have to keep on trying. The achievement is the happiness you feel when you accomplish the trick, the same with life when you achieve an objective. It's something satisfactory for yourself," explains Estefani Morales, a member of Imilla Skate.

The women's passion for the sport has drawn them together. "Skating as the Imilla Skate has helped us to bond, to strengthen ties as friends, as skate mates, even as a sisterhood. We are close to each other. We don't just skate, we support each other with our problems," says Brenda.

The collective aims to inspire other young girls to skateboard. Other women have started their own crews in response to their social media campaigning.

"The mothers and grandmothers of the girls from our crew are happy with what we are doing because we are giving a twist on how women in pollera are seen. It's great to contribute to that," says Daniela Santivañez.

Cholitas are proud of their roots and they have found a way to stay modern but never lose sight of their foundations and character. They would love to see more women skating down the streets with their polleras.